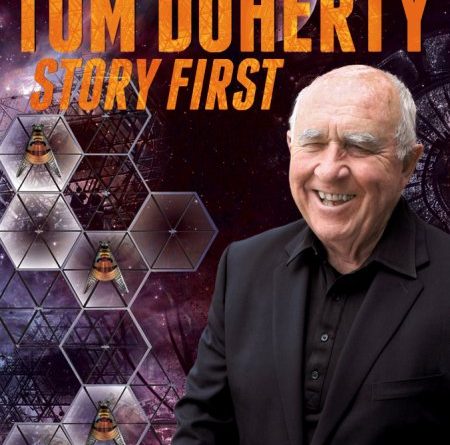 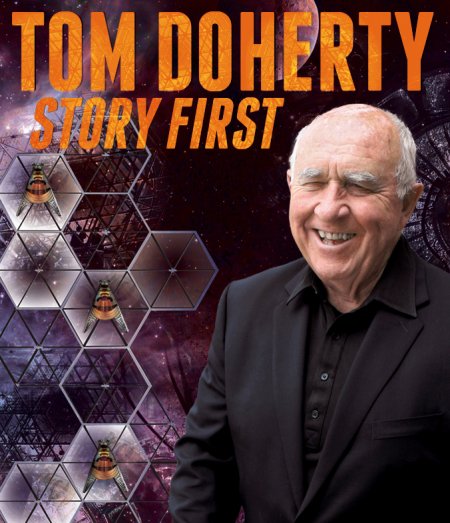 Tor publisher Tom Doherty was born April 23, 1935 in Hartford CT, where he grew up and attended Trinity College, majoring first in chemical engineering and then in philosophy, and playing football, before serving almost two years in the US Army.

His first full-time job was in publishing, as a sales rep for Select Magazines, at that time the national distributor for Pocket Books. Seven months later he moved to Pocket, itself in Philadelphia, where he met publishing legend Ian Ballantine in the magazine wholesaler’s warehouse. He would learn a lot from Ballantine over the years. Doherty moved around the country and within the company in a variety of sales jobs, eventually rising to sales manager of Simon & Schuster at a time when they were Ballantine’s distributor and he, in effect, was Ian Ballantine’s sales manager. During this time, Ballantine published Tolkien and proved to the world that fantasy could be a major bestseller.

Doherty moved to Grosset & Dunlap in 1969, becoming publisher of paperback books, including the YA line Tempo, which Harriet McDougal would edit. When Grosset acquired Ace in 1975, Doherty took over as publisher of Ace/Tempo, bringing Tempo editor McDougal with him as editorial director, and hiring Jim Baen from Galaxy to run the SF program.

Doherty founded Tor Books in 1980 with funding from venture capitalist Dick Gallen. Their first two books were movie tie-ins for Flash Gordon and Popeye, rushed out for the movies at the end of 1980. The full list debuted in April 1981 with Forerunner by Andre Norton. Pinnacle Books would be the Tor line’s distributor. In 1983, Baen Books became a separate company, with Doherty and Gallen as Jim Baen’s partners. Baen took with him authors he had edited at Tor who wanted to go. Some stayed, and some, like David Drake and David Weber, the companies continue to share. (Tor will be publishing David Weber’s new Safehold book In The Sign of Triumph this October.)

Distributor Pinnacle went bankrupt in 1985, their last checks bad and several million more owed to Tor never paid. Tor’s resources were strained, limiting growth. On New Year’s Eve 1987, Doherty sold the company to St. Martin’s, a Macmillan company. The deal included autonomy for the Tor division. Holtzbrinck bought Macmillan, and Tor became a wholly owned subsidiary of Holtzbrinck Publishing Group, with independence and control over its publishing lists. Pan Macmillan Australia has distributed Tor since the Macmillan acquisition. They distribute UK products including Tor UK, and of course publish their own. Melia distributed for Tor in the UK, and Tor UK launched in 2003. Books for which Tor has world rights that aren’t published by Tor UK are still distributed in Australia and New Zealand by Pan Macmillan.

Doherty has three adult children from his first marriage to Barbara Slocum Doherty (deceased), all of whom work in publishing. He married Tatiana Pashina Doherty in 1992. They live in New York City.

‘‘First comes the story. But if the story can do good, it’s a nice plus. It’s a great thing if we can stimulate good ideas and future action by the young – if they’ll read this and then maybe go out and build it. Key people in NASA management believe many of their people got into sci­ence because they read science fiction when they were young and said, ‘Yes, I want to do this.’ They believe good SF today will motivate many of our young to do the same. The way it works is, if we have ideas, we can bring them to NASA, and they’ll give us consultation. One of their missions is to interest the youth of America in science and technology. Because we need to produce more of our own homegrown scientists and mathematicians, they’re willing to work on appropriate books in order to promote that, give us free consultation, and promote the books in schools with their educational arm. We’ve always been very good at getting things onto English class reading lists, but we’ve been less good at getting books onto science and math reading lists – those teachers don’t assign much fiction. We thought NASA’s credibility could be very helpful with get­ting us onto those lists. We will work with them every time we have an appropriate book, and we’d love to have more of them.”

“I saw surveys for years that said, ‘Where do we get our new custom­ers’. From satisfying the person waiting for a pre­scription in the pharmacy, buying from a revolving rack as they waited. The person walking down the supermarket aisle to buy a pound of coffee, seeing the books, and sampling them. When you pleased them often enough in that impulse situation, they went to a store where there was more selection, and it was just a chain feeding. You had a lot of people buying impulse, but some of those people became core readers. You had the same thing with the mall readers. I saw a recent survey that asked, ‘Do you miss the Waldenbooks that was in this shopping center?’ The answer was, ‘Yes! We’d come to buy a sweater or a pair of shoes, and we’d almost always have time to walk in. If we walked in, we usually bought a book, often several.’ ‘When was the last time you bought a book?’ ‘Oh, yeah, we have to go to a bookstore soon.’ If you don’t put books where people are, you lose a lot of the market, and equally bad, you lose the sampling that hooks and begins to create the committed reader. The decline of mass market wasn’t all about e-books, it was a distribution breakdown.”

“The Internet is great if you know what you want. It’s time consuming to recognize good new authors, and you’ve got all this self-publishing. Some self-published books are great books, but there are many more that are not good books. People have a bad experience and buy fewer books. An editor fulfills a real function. Some authors are very good at seeing their own mistakes, but most people don’t see their own mistakes. If you work very hard on a book for a year, you’re so intimately involved that things that seem obvious to you are frequently not obvious to the first-time reader. Often, you need an editor to talk with the author about that, and say, ‘Wouldn’t it help if we brought out this?’ The copyediting, the proofreading, the sales, and the marketing matter too. At Tor.com, we have between a million and a million-and-a-half unique visitors a month, and it’s very hard for an author to build that kind of reach for themselves. There still are places we can get the book in front of people’s eyes. The combination of things we do as a publisher we do because we think they are valid and necessary to the continued enjoyment of reading.”

‘‘I think we publish around 350 books a year. That’s in all editions. Many of them are repubs of books in hardcover that we’re doing in paperback. It could be a trade paper or mass market. The trade paperback has always been around, it just was a much smaller part of the market. E-book originals are now also a factor. We’re trying to make up for the loss in mass market sales. It’s been a problem for us and for authors. You can’t lose so many retail­ers and keep the same sales unless you innovate.

‘‘We’ve got to be of value to our authors, too. We’ve had a huge investment in Tor.com to get to our million-and-a-half monthly uniques. What we lost in retail, we gained over on the net. It’s a bloody shame we can’t have both, but that’s the kind of thing we’re doing now: more social media, more networking, more school marketing, working with organizations like NASA, getting as much display as you possibly can, without counting on the display to be the prime motivator. Display is still important, but you’ve got other motivators, which are now equally important.’’

Read the complete interview in the February 2016 issue of Locus Magazine. Interview design by Francesca Myman.