Writer George Clayton Johnson, 86, died December 25, 2015. Johnson is best known in the genre for co-writing Logan’s Run (1967) with William F. Nolan, and for his work as a screenwriter. He wrote several episodes of The Twilight Zone as well as the debut episode of Star Trek, “The Man Trap” (1966).

Johnson was born July 10, 1929 in Cheyenne WY. He served the Army before enrolling at the Alabama Polytechnic Institute under the GI bill, later dropping out to travel and work as a draftsman before becoming a writer. His first publication of genre interest was “All of Us Are Dying” (1961), and some of his short work is collected in All of Us Are Dying and Other Stories (1999). Collection Scripts and Stories Written for The Twilight Zone appeared in 1977, and a collection of scripts and commentary, Writing for The Twilight Zone, in 1981. He also wrote the short story that formed the basis of film Ocean’s 11 (1960), and contributed scripts to Alfred Hitchcock Presents and other TV programs.

For more, see his entry in the Encyclopedia of Science Fiction. See the February issue of Locus for a complete obituary and appreciations.

His death was widely but erroneously reported as occurring on December 23, 2015. We regret any confusion that resulted from our reposting of those reports. 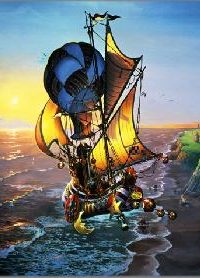