New release Trigger Warning by Neil Gaiman dominated the hardcover list with over twice as many points as second place win¬ner, The Just City by Jo Walton. Impulse by Dave Bara (DAW) was the new runner-up. There were 45 titles nominated, down from last month’s 56.

In the paperback category, Patricia Briggs’s Night Broken (book eight in the Mercy Thompson series), claimed first place from last month’s winner The Name of the Wind by Patrick Rothfuss, now in second place. The new runner-up was Murder of Crows by Anne Bishop (Roc), with 51 nominated titles, down from 62 last month.

For the fourth month in a row, trade paperbacks The Martian by Andy Weir and Ancillary Justice by Ann Leckie took the first and second spots respectively. There were no new runners-up, with 35 nominated titles, up from last month’s 29.

In media-related books, Star Wars: Maul: Lockdown by Joe Schreiber barely beat out last month’s second place winner, Star Trek: The Next Generation: Takedown by John Jackson Miller to take first place. There were no new runners-up. There were 16 nominated titles, down from 20 last month. 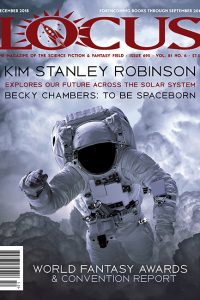 A collection of academic essays on Science Fiction in India, edited by Dr. Arvind Mishra (among others), is available on Kindle for just $6.99. [Via Cheryl Morgan] Judith Tarr on Being the Other and empathy, particularly in historical fiction. “History is not a theme park.” [Via SFSignal.com] Adam Roberts reviews Jennifer Egan’s A Visit from the Goon Squad in PowerPoint form. John H. Stevens returns from ReaderCon with some thoughts