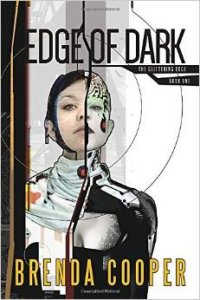 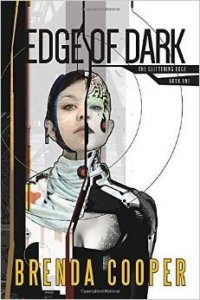 Brenda Cooper established the far-future background for Edge of Dark, Book One of duology The Glittering Edge, some years ago in The Creative Fire (2012) and The Diamond Deep (2013), but newcomers won’t have much difficulty getting their bearings as she moves forward a generation and introduces three new viewpoint characters to a solar system whose human settlements and satellites face a growing threat from long-isolated deep space where colonies of ‘‘undesirables’’ have managed to survive – and vastly extend their lives – through forms of high tech that make them resemble shape-shifting robots.

Until now, these humanoids who call themselves the Next have limited their contact with humans largely to raids on the fringes of civilization, brief attacks by ‘‘ice pirates’’ who don’t look like an advance guard scouting out territory for invading armies. None of the lead characters have reason to suspect what’s coming. Charlie works as a ranger on Lym, a planet twice trashed by colonists but now being ‘‘rewilded’’ to something like its original state. Nona, a biology teacher who has never gone beyond vast satellite The Diamond Deep, comes into unexpected wealth with her mother’s death and resolves to leave both parents’ ashes under the skies of Lym, as they intended. Chrystal, a former schoolmate and friend of Nona’s who moved a smaller satellite where the closest thing to farm life consists of breeding strange evolutionary variant plants and animals on the gardened inner walls of a metal cylinder, expects to spend long years there with her ‘‘family’’ (another female and two males) as part of a romantic foursome.

While Nona is on Lym with Charlie as her guide, a group of Next take over Chrystal’s satellite. When all communications cease and the place seems to vanish, human complacency suffers a major jolt. In changing times, viewpoint characters get drawn into the most dangerous game of all: political manoeuvering between major powers, with a reluctant Nona and a horrified Charlie obliged to represent the satellites and planets as best they can in a fractured political landscape. Chrystal and her family, moved from bodies into more enduring, sensorally heightened quasi-robotic forms, are bitterly resentful (for the most part), yet can’t ignore the links between Man and Machine, knowing they were designed to bridge the gap.

Edge of Dark brings events on a grand scale down to the level of individuals, portrayed with an intimacy we can’t deny, and capable of suffering and feeling loss – whether or not they fit into a standard definition of humanity.