This novel from the Taiwanese author Wu Ming-yi, first published in 2011 in the author’s native land, arrives hard on the heels of The Three-Body Problem by Cixin Liu, and all the acclaim that prior book accrued. Do these two instances signal a surge or boom in the importation of SF from Asia into English-speaking lands? Hard to say. Older fans might well recall the mini-boom of SF from the USSR, when a mainstream firm like DAW books would see fit to publish the Strugatsky Brothers and the publisher Macmillan had a whole imprint dubbed “The Best of Soviet Science Fiction.” But how long did that freshet run, and with what lasting impact?

Still, in any case, we are fortunate enough to have Wu Ming-yi’s novel before us to enjoy. It appears to be one of five that he has published, according to his Wikipedia entry, the second most recent. Given that he is only forty-four years old, we can expect more from his pen. We might also look for any characteristics of his global generation, someone born in pre-digital times, but still young enough to have grown up with, say, video games, and yet not a millennial.

The tiny first section of the novel is a teaser. Deep in some cavern full of technology, people are experiencing a cataclysm of some kind. The reader is immediately prepped for a disaster novel. But then Wu undercuts that expectation with a deliberate, almost gleeful one-eighty spin of tone and topic. We are on the isolated island of Wayo Wayo, where a small tribal civilization exists in precarious unity with their somewhat limited ecosystem. Wu begins in this second chapter to detail their climate and culture with anthropological depth. Then comes Chapter 3, and another shift. We are witnessing the life of Alice Shih, a retired professor who has lost her husband and only child to a mountaineering accident. Alice deems suicide her only option now, but then life intervenes, as it so often does, in the form of a stray kitten, and she casts aside her intentions.

We do not return to the cast and milieu of the first chapter for a good long time. When we do, it will be to learn about the tunneling mission on Taiwan led by a German man named Detlef Boldt. His story will intersect in curious ways with our main narrative. But in the meantime, the Wayo Wayo thread and the Alice Shih thread will be advanced in alternating segments. Our focus in Wayo Wayo—or off the island, really—is Atile’i, a bold young man who leaves behind his lover, Rasula, for a sea voyage. Losing his boat, Atile’i becomes a castaway in a most unusual place. As for Alice, with the help of two friends—Dahu and Hafay, both of whom are not pure Han Chinese, but rather members of aboriginal groups, whose accommodations with the modern world form one of the central themes of the novel—she will seek a deeper reconciliation with the tragedy of her past.

And then, after we have thoroughly inhabited these two separate frames, they eventually fuse.

That fusion arises due to a catastrophe. In the middle of the Pacific lies the Great Trash Vortex, an agglomeration of mankind’s debris, plastic and otherwise. It is here that Atile’i is castaway—a meaty portion of the novel is his Robinsonade—and it is this blunt mass which will soon be hurled upon Taiwan, landing right at Alice’s feet, so to speak. The devastation has a bright side, in that it brings Alice and Atile’i face to face, yoking their insufficient lives into a kind of strong-at-the-broken-parts whole.

Obviously, Wu’s story resonates with the historical April 2011 Fukushima Earthquake that struck Japan. A USA or UK novelist’s treatment of such a scenario would probably have read something like The Day of the Triffids or other postapocalyptic classics. But Wu takes what might be seen as a more typically Asian or Buddhist or Taoist approach to the disaster. There is really not so much physical catastrophe or heroics, not so much focus on derring-do, as there is attention paid to the opening of a transformative psychic space in which the people undergo spiritual and intellectual adjustments. In this sense, it’s a bit of a Ballardian disaster novel, and the reader might even flash on Concrete Island when Atile’i is marooned among his detritus. I also think that Wu’s generational status, suspended between Boomers and Millennials, influences his strategy. He cannot buy into the old John Wyndham scenarios, but he is also not as arbitrary or nihilistic or disaffected as many younger writers.

There’s a bit of Vonnegut in Wu as well, in the depiction of the Wayo Wayo tribe. Wu does not display Vonnegut’s sardonic whimsicality, but there are flashes of it in the too-good-to-be-real portrait of these natives. Wine produced by beautiful women chewing their herbal cud? It’s got the vibe of the bouncily caustic Talking Heads song, “Nothing But Flowers.”

As for the titular figure, the man with the compound eyes, suffice it to say, avoiding spoilers, that he is a kind of natural force or avatar whose presence will be revealed at the proper moment.

The fact that toward the book’s end Alice, revitalized, has written a novel titled The Man with the Compound Eyes speaks to the way in which larger cosmic forces flow through all living things, redeeming their inevitable losses, even through such seemingly crass instruments as a horde of seaborne trash.

The Man with the Compound Eyes 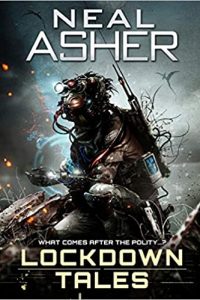 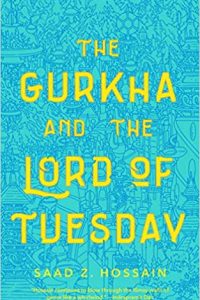 Gary K. Wolfe Reviews The Gurkha and the Lord of Tuesday by Saad Z. Hossain