January 2015—
Issue 164-165, cover art by Sam Burley
• Issue 165, posted January 22, has stories by Therese Arkenberg and Raphael Ordoñez, with an audio fiction podcast by Bonnie Jo Stufflebeam, an archive podcast by Justin Howe, and an archive story by Rosamund Hodge.
• Issue 164, posted January 8, has stories by Bonnie Jo Stufflebeam and Tamara Vardomskaya, a novel excerpt by James Morrow and an audio podcast, an audio vault podcast by Geoffrey Maloney, and an archive story by K.D. Wentworth.

January 2015—
• Fiction posted this month includes Vacui Magia by L.S. Johnson, The Animal Women (part 2) by Alix E. Harrow, and The Truth About Owls by Amal El-Mohtar.
• The site also has podcasts of these stories, and poetry by Marinelle G. Ringer, Daniel Ausema, Samantha Renda-Dollman, and David C. Kopaska-Merkel, with a poetry roundtable podcast.
• Columns are by Genevieve Valentine, Liz Bourke, and Eleanor Arnason. There are also interviews with Julia Rios and Alisa Krasnostein and Jo Walton, and an editorial presenting results of the 2014 readers’ poll.

January 2015—
• Stories posted this past month include Faster Now by Paul Di Filippo, How a Machine Works, Exactly by Mark von Schlegell, CES 2067 by Sam Biddle, Re-Homing by Debbie Urbanski, and Rockall by Andrew David Thaler.

January 2015—
• Stories posted this past month include Kia and Gio by Daniel José Older, A Beautiful Accident by Peter Orullian, And the Burned Moths Remain by Benjanun Sriduangkaew, Damage by David D. Levine, and The Sound of Useless Wings by Cecil Castellucci.
• Excerpts include those from works by Walter Mosley, Elizabeth Bear, Will Elliott, Neal Asher, and others. 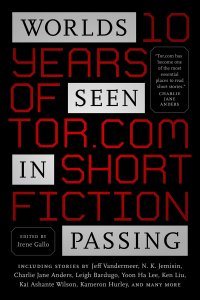 At ICFA, I was lucky enough to be on the same continent as regular Locus Roundtable contributor, Graham Sleight. We took advantage of the opportunity to sit down and record a podcast without worrying about time zone coordination. We talk about: the classic sf space futures that never were, how the field has changed and evolved, space travel and global warming, and storyable futures. Below are some links from the