Fantasy novel about a strange village in the Ontario woods and the five clans who’ve lived there for hundreds of years.
• ChiZine’s site has this description with links to samples in various formats.
• The site links to this Entertainment Weekly review column on short-story cycles, which describes this book as “a vivid, haunting mix of horror and fantasy woven together through a complex fugue of short stories. The effect is powerful. It’s a book you have to work hard at, in order to make sure you’re not missing any of the peripheral connections. But it rewards the effort, and then some.”

Fantasy novel, first book in a series, about a Boston paramedic whose side job is to ferry the dead to the Afterlife.
• Amazon’s page has a description, and its “Look Inside” function provides previews.

Middle-grade fantasy novel, first book in a series, about a half-blood blond girl in a magical secret kingdom.
• Macmillan’s site has this description.
• Subsequent volumes are due in May and August.
• The Publishers Weekly review notes that the book is set in the world of the author’s Trylle trilogy, and concludes, “Those unfamiliar with Hocking’s Trylle novels may find the boundary between the human and troll worlds difficult to discern, but the novel’s lingering questions and the author’s knack for cliffhangers are reason enough to anticipate the next installment.”

Alternate history steampunk novel, the author’s first novel, set in an 1877 in which US land west of the Mississippi has been sold to Russia.
• Night Shade’s site has this description with blurbs from Phil Foglio and K.W. Jeter.
• The Publishers Weekly review: “…O’Flaherty has done plenty of research and thought through the implications of the changes to history…”

Fantasy novella in the setting of Powers’ first novel The Anubis Gates (1983).
• Subterranean’s site has this description and order page.
• Gary K. Wolfe reviews it in the January issue of Locus Magazine: “Nobody’s Home is a fairly slight tale which only hints at the richness of invention of the larger world of The Anubis Gates, but for all its brevity it packs a fair amount of Powers’s uniquely evocative prose, his skill at quickly establishing a vivid, ominous setting, and his gift for extraordinarily creepy figures…”
• And Lois Tilton reviewed it for Locus Online: “There’s a lot of interesting ghost lore, which seems to be the original creation of the author. I’m particularly taken by the use of a hopscotch course for the purpose of exorcism.”

Nonfiction guide to Terry Pratchett’s Discworld series, second volume following The Science of Discworld (US edition June 2014 from Anchor Books). This second volume, first published in 2002, does not seem to have been revised since then.
• Random House’s site has this description with a preview function. 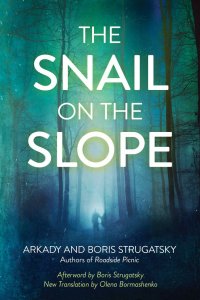 Bogi Takács is a reviewer and linguist in Hungary. One of the most important works of Hungarian science fiction has never been translated to English; it’s been translated to German, but the German editions are long out of print. The Gregor Man trilogy by Péter Zsoldos changed the way entire Hungarian generations saw science fiction and fantasy. I’ll try to summarize the plot in a nutshell (this means spoilers!) and

It All Started When: Charles Stross