Omnibus of three novels: Midnight at the Well of Souls (1977), Spirits of Flux and Anchor (1984), and The Identity Matrix (1982).
• Orion’s site has this description.
• Amazon’s “Look Inside” function provides previews.

Omnibus of a short story collection (from 1950, with an introduction by John W. Campbell, Jr.), whose title story is about the first moon mission, and a short novel (1963, combining two novellas first published in 1941) about a generation starship.
• This edition has an introduction by William H. Patterson, Jr., and an afterword by Mark L. Van Name.
• This is a mass-market reprint of Baen’s 2013 trade paperback edition.
• Baen’s site has this description with links to Heinlein’s introduction to the collection and to his timeline. 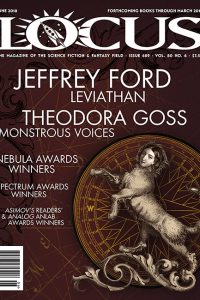 Richard Kadrey: Running with the Devil

Richard Albert Kadrey was born August 27, 1957 in Brooklyn NY. He spent ten years there, and the next ten years in Houston TX. He briefly attended college before working a wide variety of jobs, including running a jewelry store, and working in numerous warehouses and department stores, driving forklifts and ‘‘moving stuff around.’’ He’s also been a rock musician and magazine editor, and hosted live interview show Covert Culture