A couple of months ago, discussing The Magician’s Land by Lev Grossman, I noted how it reconfigures tropes from fairy tales and children’s/YA fantasy for older readers. Gregory Maguire did something like that to Baum’s Oz books and the movie they inspired, begin­ning with Wicked (which spawned its own hit Broadway musical) and continuing in three more volumes, collectively called The Wicked Years. Maguire clearly likes dealing with witches, and the child-eating crone Baba Yaga has a major role in his latest novel, but Egg & Spoon takes us a long way from Oz (or Kansas): to Russia, in the last days of tsarist rule.

Before starting in on the chronicle, the anonymous narrator touches on another episode that still haunts him: abduction by soldiers. He confronts us with the trauma: ‘‘If you’re ever dragged from your chambers at midnight, blindfolded and gagged, without being told whether you’re off to a firing squad or a sur­prise birthday party, you’ll find that you turn and return to that pivotal moment.’’ By now, enough time has passed that he can see it in a wider context – which also provides the mortal framework for the book: ‘‘Your life story is re­ally about how the hands of history caught you up, played with you, and you with them. History plays for keeps; individuals play for time.’’ That last quip is the result of bitter experience, for this man once worked as an advisor to the tsar. Torn from that role, the best he could get is years of bleak survival in isolation… aside from strange communion with birds.

Though Russian myths and folklore infuse the book, and won’t just linger on the sidelines as quaint old tales, its crucial contact between two very different young lives involves the interrupted journey of a private railroad train. Ekaterina (Cat) is being carted off to St. Petersburg for some gala occasion she’d rather not attend, to meet the tsar, his godson, and other young men. Traveling with a crusty great-aunt, a British governess, a French butler, and a few other servants, Ekaterina glumly anticipates her debut on the marriage market (which won’t wait for the full onset of adolescence). Meanwhile, not far from the chasm where a bridge recently collapsed, Elena lives in what’s left of a hungry, decimated village where soldiers took away the teen boys, something caused the teen girls to vanish, her father died, and her mother barely clings to life.

Egg & Spoon anchors the stuff of melodrama and romance to more basic truths, some of them about class. While its eggs range from a richly ornamented Fabergé creation to a Firebird’s offspring (in a large but only slightly uncanny shell), the other title object first appears in a quote from Dickens’s Bleak House: ‘‘Society… has taken upon itself the general arrangement of the whole system of spoons.’’ Even after their worlds cross, sending each girl off on a strange, dangerous new trajectory, they’re not overwhelmed by feelings of mystic sisterhood.

When the year ignores the normal progres­sion of seasons, bypassing the stasis and hid­den renewal of winter for the overwhelming torrents of spring, it presents a dire threat to Saint Petersburg, conceived and built by royal fiat on a flood plain. In our own era of unsettling weather changes, both real and fictional (genu­ine floods in Phoenix AZ, divinity pissing on L.A. in Kadrey’s The Getaway God), it might seem tempting to view the Firebird’s unhatched egg in terms of an eco-fable: damaged Earth. But Maguire is much too deft to let his tale sink under a freight of Message.

His more antic qualities emerge in Baba Yaga and her cottage – weirdly mutable except for one fabled feature, the gigantic chicken legs that make it a mobile home. Though she revels in the role of child-eating hag, her mind is free to wander far beyond the confines of Old Russia. Tradition mingles with an irreverence that transcends time as she describes her larder and picks a snack to share with a young visitor (potential victim?):

We have eye of newt and toe of frog, carbon-crisp residue of manticore loin, a beaker of all-natural belladonna extract, some wolfbane, some romaine, a poteen of ptomaine, and a few limp radishes in butter, pinched from the platter left out for Marat after his bath, which he never got to since he died therein. Let’s have Cheerios.

When that last item baffles the visitor, Baba blithely replies, ‘‘They haven’t been invented yet…. You’ll love them.’’

Mingling in-jokes with history and witch­craft, fantastic creatures with disruptions in the weather, Egg & Spoon provides a feast much richer, subtler (and more digestible) than borscht with a side order of breakfast cereal. 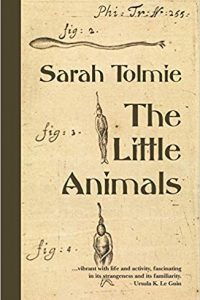