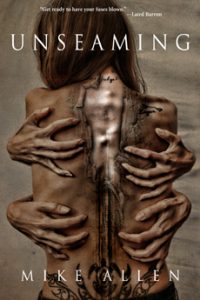 At no point during the slow learning curve of my writing career have I ever said to myself, “I want my writing to be the weirdest anyone has ever seen.”

At first glance my influences seem quite mundane by the standards of a genre writer: as a kid I did, after all, read The Lord of the Rings, The Foundation Trilogy, numerous novels by Stephen King.

And yet somewhere along the way there came a strange turn. Hell, a strange spiral. A Möbius knot. Witness these excerpts from Rich Horton’s review column for the print version of this very magazine:

Mike Allen is good again… with a very odd SF story, “Twa Sisters”… beginning with a deliberately retro painter encountering a person half tree/half woman and just getting stranger from there.

Mike Allen’s “Still Life With Skull”, set in the same very strange world as his “Twa Sisters” from last year, is about the most adventurous story here… it’s not always easy to get what’s going on, which is part of the point, I think.

My first collection of short stories, Unseaming, is on the verge of being released from teensy Antimatter Press. The book doesn’t contain any of the stories listed above; it’s a collection of tales that I personally thought of as uncomplicated, bloody-meat-and-potatoes horror, though Publishers Weekly, in granting the book a starred review, didn’t support that notion:

His unsettling Nebula-nominated “The Button Bin” is as disorienting as it is disturbing… Never obvious, sometimes impenetrable, Allen’s stories deliver solid shivering terror….

Disorienting… impenetrable… by Jove, I think I see a pattern. Or as a good friend of mine just put it to me, “Your stuff is also batshit bonkers.”

Another friend informs me that at the most recent WorldCon in London, when someone on a short fiction panel complained of a dearth of experimental stories pushing at narrative boundaries, a fan in the audience brought up the anthology series that I edit and publish, Clockwork Phoenix, as a counterexample.

Proud as this makes me, there’s a part of me that can’t help but side-eye the Jim Butcher and Joe Hill novels on my shelves and wonder, how did I end up here?

How odd. How fundamentally weird.

It’s hard to put my finger on a starting point. My fascination with the movie and then the book The Lathe of Heaven? The way I loved L’Engle’s A Wind in the Door even more than A Wrinkle in Time? The morbid childhood freak-outs caused not just by Poe, Lovecraft and King, but Ellison’s “I Have No Mouth and I Must Scream”, Jackson’s “One Ordinary Day, with Peanuts”, Disch’s “Descending”? The thrills I got from the boundary-pushing stories in The Books of Blood?

It wasn’t just literature. A vague notion that I might pursue visual art led me to the Surrealists, whose images from dreamscapes spoke to my teenage imagination as profoundly as the fantasy landscapes of Le Guin and Zelazny. My admiration for films like Brazil and City of Lost Children surely emerges from the same place.

And as it turns out, my creative palette uses many of those same colors. Not out of any kind of conscious agenda–the process, I suspect, has been more akin to osmosis. I arrived at the aesthetic that informs Clockwork Phoenix and my magazine Mythic Delirium over a period of many years. The grimmer but taxonomically related aesthetic that informs my own writing took even longer; it’s still mutating and changing, even. Perhaps the mutating and changing is all that’s constant.

So, yes, I grew up on Tolkien and follow the adventures of Harry Dresden. My favorites, though, are Thomas Ligotti and Laird Barron, opposite poles on the same dark star. I’m honored that Laird was willing to endorse my Unseaming with an introduction, and just as honored that Tom endorsed it too, and even gave me useful feedback. Ligotti called my stories “fun”–I want to wear that blurb like a medal.

This spring, I was delighted to finally experience Livia Llewellyn’s Engines of Desire, the darkest, most brazenly twisted and beautiful book I’ve read since Brian McNaughton’s The Throne of Bones.

I am reveling, this summer, in the triumphantly weird crossover hit that is Jeff VanderMeer’s The Southern Reach trilogy. This is not because I see it as striking some sort of grand blow for the cause of “The Weird” (though given that Jeff and his wife Ann co-edited the epic anthology The Weird, his novels may in fact be doing just that). It’s more just that I’ve really enjoyed a series that is strange, disorienting, impenetrable yet hugely entertaining, too.

I’m looking forward to the release of Nicole Kornher-Stace’s young adult novel Archivist Wasp, a mashup like nothing else out there that blends a high-tech sci-fi adventure with a ghostly descent into the underworld. Nicole has appeared in the Clockwork Phoenix books, and she’s already committed a short masterpiece of the weird in her should-not-be-overlooked novelette The Winter Triptych.

My idea of perfection, for the moment, might be along the lines of Cormac McCarthy as adapted by Federico Fellini. I haven’t pulled that off myself, yet, and I’ve not seen it anywhere out there, yet. I’m working on a new novel, though, and planning to launch a Kickstarter campaign for Clockwork Phoenix 5 next year.

Mike Allen’s first novel, The Black Fire Concerto, came out last year from Haunted Stars Publishing, and he’s written a sequel, The Ghoulmaker’s Aria, that’s in the revision stage. He’s just released a new poetry collection, Hungry Constellations; his first short story collection, Unseaming, will debut at the 2014 World Fantasy Convention. He’s also the editor of the critically acclaimed Clockwork Phoenix anthologies and the fiction and poetry webzine Mythic Delirium. He and his wife Anita live in Roanoke, Va., where he works as the arts columnist for the daily newspaper.