July 2014—
• Stories posted this past month are by Nina Kiriki Hoffman, Mari Ness, Bonnie Jo Stufflebeam, Chris Batchelor, and others.

July 2014—
• Original stories posted this past month include The Devil in the Details by Debra Doyle and James D. MacDonald, Sleep Walking Now and Then by Richard Bowes, The Angelus Guns by Max Gladstone, A Short History of the Twentieth Century, or, When You Wish Upon a Star by Kathleen Ann Goonan, Brisk Money by Adam Christopher, The Colonel by Peter Watts, and A Cost-Benefit Analysis of the Proposed Trade-Offs for the Overhaul of the Barricade by John Chu.
• Excerpts include those from novels by Peter Watts, Daryl Gregory, Greg Egan, and many others. 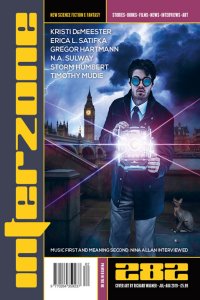