Previously, I’ve enthusiastically registered my enjoyment and endorsed the first two books in this ongoing series by John C. Wright, Count to a Trillion and The Hermetic Millennia. You can read my reviews of this thoroughly modern, action-and-idea-stuffed space opera here and here. If you’ve grown hazy on the events of the first two adventures, or if you’re entirely new to Wright’s universe, my brief synopses might launch you happily into the third installment.

But not to worry: Wright swiftly brings readers up to speed as well in the first few pages, before plunging into new events. Allow me to offer my own précis once more. Our hero is Menelaus Montrose, the Judge of Ages, so-called because he is embarked on a harvesting and winnowing of the various Stapledonian clades and subspecies of humanity that have arisen over the past eight thousand years of history since Montrose was born in the year 2210. (A handy timeline at the book’s back allows for easy sorting out of the complex chronology.) Montrose’s lifelong goal is two-fold: to raise up a defense force of the most competent, Darwinically tested warriors against a coming interstellar alien invasion, and to be ready to greet his mate and bride Rania when she returns from her own star mission. Montrose goes into frequent suspended animation (he’s only experienced eight years of subjective time during the passing millennia), and legends of the sleeping Judge have permeated the cultures that followed him.

His arch-rival working to betray humanity is the leader of the Hermeticists, Ximen del Azarchel.

But a spanner has been thrown into Montrose’s plans. He has been awakened in untimely and helpless fashion in the year 10,515 by a Hermeticist named Ull, his Tombs have been ravaged, and he faces extinction at the hands of unwitting barbarian dog men.

Only by masquerading as a lowly servant during the chaotic rousting and ravaging of the Tombs can he buy time to win back his legacy. It helps that someone else—a descendant of his named Simon, as it eventuates—is representing himself as the real Montrose! As the despoilers assemble the newly revived folks in Montrose’s Throne Room, Montrose encounters old revivified friends and allies who eventually join him in an immense high-tech battle to regain their birthright. But after winning at least a temporary victory, Montrose discovers that he is facing annihilation from an immense mechanism of destruction, judgment by aggrieved entities he has manipulated, and a sly plot by the Hermeticists that he uncovers perhaps too late to thwart!

In this installment of his far-future adventure, which blends flavors of Ed Hamilton, Stephen Baxter, Doc Smith, Jack Vance, E. R. Eddison, C. S. Lewis, Jack Williamson and A. E. van Vogt into a unique and generally tasty mélange, Wright tries something daring which I’m not certain is a complete success. The entire action of the story takes place in the cloistered environment of the Tombs or, towards the conclusion, on the nearby surface. There’s no large canvas, no zipping back and forth among stars and down the centuries, as we have come to expect.

Instead, all the action and interlocutory jousting and parsing out of who’s done what to whom is confined in a very narrow timeframe and a very narrow physical environment. I’m reminded of Neal Stephenson’s tour-de-force scene in Reamde, where a large elaborate gun battle in a skyscraper, which might have occupied a mere hour of the participants’ time, was made to sprawl out over one hundred pages or so of narrative. Here, Wright tries for something similar, but three times as long. He manages to beguile us with history, suspense, exotic characters, lofty dialogue and deadly combat, but a certain element of claustrophobia does prevail. One wishes for a change of scenery that never comes. The destructive arrival of nemesis del Azarchel for a final (?) showdown does introduce a little variety, but still in the same basic setting. I chalk up this fixed scene-stasis to this book occupying that usual dreaded spot in a series, number three out of five, where introductions and initial developments are over, but the ultimate climax is yet to come.

Having said that, I go must go on to affirm that the novel provides much pleasure. Wright marshals up a big backstory of human evolution that proves to have some secrets we had not known before. The titanic battle scenes are full of mind-boggling super science. The camaraderie among Montrose and his pals evokes Arthurian depths of feeling. Alien psychologies are plumbed, along with Montrose’s old-fashioned, native Texan, dogmatic pureness of intention. And the book’s surprise ending does represent a sea-change of sorts.

Paramount above all is Wright’s lofty fabulism of prose (with some contrasting down-home locutions from Montrose). When one recalls that Wright has recently issued a volume of his stories set in William Hope Hodgson’s baroque Night Land subcreation, some of the roots of Wright’s affinity for Homeric syntax and Shakespearean eloquence becomes more apparent.

There are moments when this book seems poised to fall into a kind of Henry Darger idiolect and private vision: call it The Story of the Menelaus Montrose Girls, in What is Known as the Realms of the Far Future, of the del Azarchel-Hermetical War Storm Caused by the Dog Slave Rebellion. But every time, at the last minute, Wright pulls back from mysticism and private symbology to show us startling philosophical vistas of futurity only he could deliver.

The Judge of Ages 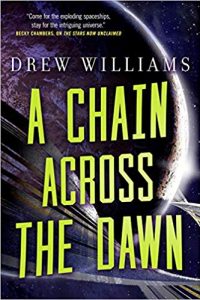