When it was first announced that Nnedi Okorafor’s new novel Lagoon would be an alien invasion story set mostly in Lagos, Nigeria, I imagine I’m not the only one who suspected the tone of the book might well be along the lines of ‘‘District 9, take that!’’ The very reasonable displeasure that Okorafor and other Nigerians felt at that movie’s portrayal of Nigerians as cannibalistic gangsters nearly overshadowed the film’s most original accomplishment, which was to suggest that aliens first visiting Earth might well end up somewhere other than suburban London or the Washington Mall. But it quickly becomes apparent that Lagoon is not simply out to redeem the Nigerian image, and some of the novel’s most powerful passages are bluntly honest about some of that country’s real problems – corruption, radical economic inequality, gangs of ‘‘area boys’’ roaming the streets, the sometimes thuggish behavior of the military, opportunistic religious leaders, intolerance bred of superstition. Lagos is as much a character in the novel as any of its central players. As it has grown into one of the world’s most populous cities, it seems poised on the brink of either unmanageable chaos or complete transformation, and in Okorafor’s skilled hands the arrival of the aliens serves as a kind of tipping point of possible futures.

Lagoon (a translation of the Portuguese Lagos, referring to the city’s most prominent feature) begins as Okorafor’s most conventional science fiction novel – an enormous alien craft smashes into the ocean just off Bar Beach – which ironically makes it the least conventional among her own novels. In place of her usually focused point of view, we get the multiple viewpoints more characteristic of disaster epics – not only the three main characters, but a proliferating host of other viewpoints, from a secretary who moonlights as a prostitute to a mute boy, an American singer, a corrupt clergyman, and even a swordfish, a bat, a wounded tarantula, and a spider. In place of her famously rich descriptions of empty deserts and lush jungles, we get a kind of gritty urban realism, occasional bursts of comic-book style action (complete with onomatopoeic sound effects (BOOM! Plash! Crunch! BONG!) and even, eventually, a few superhero powers. Other elements seem to derive from video games or movies (the story originally began evolving as a screenplay) with spectacular sea monsters, horrors from Nigerian folklore (a few of which we’ve seen earlier in stories like ‘‘On the Road’’), and allusions to everything from Star Wars to The Little Mermaid and, perhaps less directly, films like The Day the Earth Stood Still and The Man Who Fell to Earth. In other words, while Okorafor’s impressive inventiveness never flags (and really takes off in the second half of the novel), it arrives in the service of a fairly familiar narrative setup.

Like her earlier novels, though, Lagoon combines elements of SF and magic in such a way that you’re never sure which is which at first. The three central characters are a marine biologist named Adaora, a compassionate soldier named Agu, and a Ghanaian rap star named Anthony, all of whom are on the beach when a thunderous explosion is heard, followed by a tsunami-like wave which seems targeted at them alone, sucking them into the aliens’ lair but later depositing them unharmed. At the same time, witnesses see a strange woman – initially described like smoke – emerge from the sea. This turns out to be Adoyele, a shapeshifting figure who serves as the story’s Klaatu, speaking on behalf of the aliens (many more of whom eventually follow her ashore) and their intentions, by taking over virtually all the media in Lagos. The social chaos which follows – many view the aliens as witches or demons – leads to scenes of graphic violence and apocalyptic terror, until Adaora and her pals finally manage to involve the President of Nigeria who, in a neatly inverted cliché, asks Adoyele to ‘‘take me to your leader.’’ That may be the novel’s most waggish use of SF boilerplate, but throughout there is a sense that Okorafor is having a good deal of fun picking up her Lego bricks from SF, horror, comics, superhero tales, folklore, horror, and even animal fables, and constructing something a good deal more architectural and less ungainly than it seems it ought to be. Fortunately, even though her central concerns are as serious as in her previous fiction – and perhaps a good deal more timely – we get to join in the fun as well. 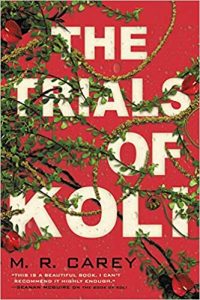 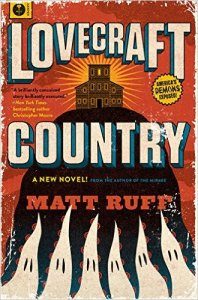 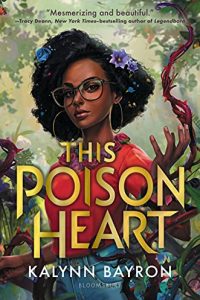