Eileen Gunn’s wry, droll intelligence and cockeyed storytelling magic shine forth like some kind of quasar beacon from every one of these surprising, irreplaceable stories—two of which have never before seen print. She’s the Polaris of fabulism, a goal to steer by. And as if her stellar talents were not sufficient to induce you to snatch up this collection, she has co-stars in the form of Rudy Rucker and Michael Swanwick. You should probably abandon this review right now, for a minute or several, and go order this book online or at your local brick-and-mortar outlet.

Okay. Now that you’re back, let’s look at the tales.

“Up the Fire Road” is, for one thing, a miracle of voice modulation and emulation. Two narrators—a flaky dude named Christy and a more practical, skeptical gal named Andrea—get lost in the misty mountains while cross-country skiing and encounter a sasquatch. Or is the figure simply an old hermit? And what of the wilderness dweller’s gender? Male, female? In Rashomon-style alternating passages, the exploits of the threesome—along with some other supernatural denizens, are unrolled with a surprise around every bend of the narrative. That the whole affair culminates in a wild blowout on the set of a tabloid TV show is the least outrageous aspect of this hilarious yet eerie tale.

“Chop Wood, Carry Water” is one of the hitherto-unseen pieces, some thirty pages long. It’s the tale of the mythic Golem of Prague told from the golem’s POV. While it resonates with the great debut novel by Helene Wecker, The Golem and the Jinni, to my ears it also compares favorably to the wonderful theological and existential probings of James Morrow. The Golem’s plight intersects the common lot of humanity at odd angles, rendering the creature both more and less than a child of Adam.

Just long enough at two pages, the little jape entitled “No Place to Raise Kids: A Tale of Forbidden Love” carries out the premises of slash fan fiction to absurd lengths.

In “The Trains That Climb the Winter Tree,” Gunn and Swanwick have accomplished something that I thought impossible. They have created a story that could be mistaken for a genuine period example of the best Edwardian YA fantasy, something by E. Nesbit perhaps, without falling prey to mere pastiche. They inhabit the antique worldview honestly and faithfully, and the result is consequently authentic. One Christmas Eve, malign elves slaughter the adults in a household, take their identities, and begin to weave a dire fate around the children of the family. The rescue of the children relies on daughter Sasha—aided by her suddenly intelligent and talkative dog, Mr. Chesterton. This is a wise and heartfelt tale.

Rudy Rucker brings to the table his patented gonzo stylings and cyber-themes for “Hive Mind Man,” a slam-bang account of how amiable slacker Jeff turns into a living conduit for the cultural zeitgeist. But I detect in the character of Jeff’s long-suffering and ingenious lover Diane the empathetic touch of Ms. Gunn. Not, as we have seen, that she is any stranger to generating many weird concepts herself. In any case, the piece reads seamlessly, without any sign of where one writer handed over the traces to a partner, and ends on an upbeat note so often missing from contemporary SF.

“Thought Experiment” focuses on time travel, and does up that hoary yet eternal trope in grand style, offering a clever new version of atemporality, full of paradoxes and humor. Mr. Swanwick returns for the epistolary, writer-centric humor of “‘Shed That Guilt! Double Your Productivity Overnight!'” The appearance in F&SF of this story seems to me to be the continuation of a grand tradition most famously exemplified by Avram Davidson’s “Selectra Six-Ten.” Back solo, Gunn shows herself a true stylistic chameleon and Robert Benchley-esque maker of pastiches with the four vignettes under the rubric “The Steampunk Quartet,” each of which takes the hilarious piss out of a famous steampunk work.

The first sentence of “The Armies of Elfland” cleverly inverts the opener of “The Trains That Climb the Winter Tree,” just as “Armies” goes on to turn the entire charming-albeit-consequential fairytale ambiance and milieu of “Trains” on its head. Under the influence of co-author Swanwick, the follow-up piece seems an instantiation of his concept of “hard fantasy,” a type of fantasy which blends the mythic with the quotidian, as in his The Iron Dragon’s Daughter. Here, elves have exploded from another dimension into our plane and wreaked an apocalypse. Heroine Agnes, one of a handful of surviving humans and a quintessential never-say-die Gunn-ian protagonist, finds herself a captive of the fay Queen and perhaps the only one who might begin to reverse the global destruction.

A piece of meta-meta-metafiction, “Michael Swanwick and Samuel R. Delany at the Joyce Kilmer Service Area, March 2005” finds the allegorical avatars of the named authors on a road trip, noshing burgers and slinging semiotics. This is followed by the final collaboration with Swanwick, “Zeppelin City,” which is a rousing and pitch-perfect bit of dieselpunk, the kind of story that might have been written if 1938 had never ended, featuring two great heroines, Radio Jones and Amelia Spindizzy, battling the Naked Brains.

Lastly we get the second unreprinted piece, “Phantom Pain,” which to my ears sounds like Gunn beautifully channeling everything she ever loved about James Tiptree, Jr.—particularly “Her Smoke Rose Up Forever” and “Painwise”—into her own visionary mold.

As many have lamented, including Gunn herself, it’s saddening that her stories don’t emerge from her keyboard at a faster pace. But what smart reader would exchange the current high quality of such a volume for a vaster quantity anyhow? 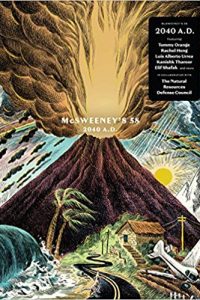