In this impressive hard-SF debut about alien culture clash, Terran scientists study a race of blind, intelligent aliens living beneath a kilometer of ice on the planet Ilmatar, while trying to maintain strained diplomatic relations with their previous extraterrestrial contact, the Sholen.

In this evocative and sometimes chilling YA by the noted Australian author, a free-spirited teacher mysteriously disappears on a school trip, sending ripples through the lives of the 11 students who accompanied her. ‘‘One of those rare writers whose work feels both true and invented, always, the uncanny seamlessly interwoven with the fabric of life.’’ [Gwenda Bond]

An original anthology of 17 collaborative horror stories, bringing together powerhouse authors who had never worked together before, with team-ups including Charlaine Harris & Rachel Caine; Tim Lebbon & Michael Marshall Smith; Sarah Reese Brennan, Cassandra Clare, & Holly Black; and Kasey Lansdale and her father Joe R. Lansdale, among others. Includes an introduction by the editor.

In this compelling near-future thriller, a onetime military sniper turned struggling writer is threatened by shadowy forces to take on a job as an assassin – while writing a novel about a monstrous serial killer. ‘‘The novel is a Matrioshka doll, or hall of mirrors, or whatever metaphor is apt for a structure of echoing and transforming motifs.’’ [Russell Letson]

This horrific fantasy novel by a celebrated New Zealand author concerns the aftermath of a bout of mass insanity that strikes a small settlement on the Tasman Bay, killing most of the residents and leaving a handful isolated among the dead.

The first in a planned series of a dozen books, this gorgeously produced ‘‘Collected Short Fiction: Volume One’’ gathers 17 stories by the late legendary author from the ‘60s, ‘70s, and ‘80s, with an introduction by Michael Swanwick and an afterword by editor John Pelan.

The literary and historical author and Pulitzer Prize finalist turns his hand to speculative fiction with spectacular results in this dystopian novel set in a future America, about a woman who escapes a labor settlement to search for her lost lover.

The Philip K. Dick Award-winning SF author takes on epic fantasy in this sprawling tome, set in an alternate version of Europe where magic works – or, at least, used to work – and history developed along radically different lines. ‘‘It achieves the drama of the best epic fantasy, while taking the form apart and putting it back together, still very much alive.’’ [Faren Miller]

The seventh volume in the snarky, inventive Marla Mason urban fantasy series sees the part-time goddess of death roaming the American southwest as a freelance monster hunter, with the living severed head of her worst enemy in a birdcage as her traveling companion.

Part literary tour-de-force, part conspiracy thriller, and part SF novel of personality transfer, this ‘‘belongs on that small but growing shelf of literary fiction which employs familiar tropes (familiar to SF readers, at least) without really being about them…. [Theroux’s] real concern is nothing less than the manner in which consciousness is constructed, and the relative fragility of identity.’’ [Gary K. Wolfe]

The first volume in the ambitious and haunting Southern Reach trilogy follows a group of four women (an anthropologist, a surveyor, a psychologist, and the narrator, a biologist) sent on an expedition to the mysterious Area X. ‘‘As the first volume of the Southern Reach trilogy, Annihilation raises the problem, sets the mood, then swiftly wrecks the vehicle of plotline… a thrill ride into Zero G, on the wings of a potent drug.’’ [Faren Miller]

A collection of 129 thoughtful, incisive essays originally published at Tor.com, covering Walton’s re-reads of a wide array of past and current works of SF and fantasy, along with ruminations on what makes books worth reading – and re-reading. ‘‘These engagingly personal readings are not so much critical essays as celebrations, as the title suggests, not only of the works themselves, but of the act and art of re-reading.’’ [Gary K. Wolfe] 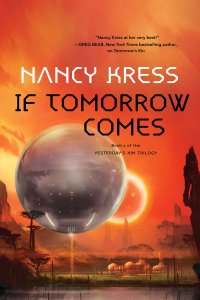 Alvaro Zinos-Amaro: What’s your favorite ant or insect movie? Chuck Wendig: Probably Heston’s The Naked Jungle. A Z-A: By any chance have you watched Saul Bass’ movie Phase IV (1974)? Or read Barry Malzberg’s novelization? CW: When I was first writing Invasive, I hadn’t seen it — had only heard about it, like an apocryphal tale. But then Paul Tremblay (author of the astonishing Head Full of Ghosts) said, you need to check this