Aaron Allston, 53, suffered an apparent heart attack and collapsed at VisionCon in Springfield MO on February 27, 2014, and died later that day.

Allston is best known for his extensive work in the Star Wars expanded universe, writing novels in the X-Wing, New Jedi Order, Legacy of the Force, and Fate of the Jedi series. His original works include debut Web of Danger (1988); Galatea in 2-D (1993); Doc Sidhe (1995) and sequel Sidhe-Devil (2001); and the Bard’s Tale novels co-written with Holly Lisle, Thunder of the Captains (1996) and Wrath of the Princes (1997). He also produced gaming and other film tie-ins, as well as gaming-related non-fiction. Allston wrote computer game Savage Empire and contributed many supplements to Dungeons & Dragons.

Aaron Dale Allston was born December 8, 1960 in Corsicana TX and attended the University of Texas in Austin. In the early ’80s he edited for Space Gamer and Fantasy Gamer magazines and worked as a game designer before moving into fiction writing in the late ’80s.

For more, see his entry at The Encyclopedia of Science Fiction. See the April issue of Locus for a complete obituary. 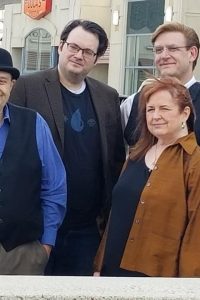