Fantasy novel, third of a trilogy following Seven Princes (2012) and Seven Kings (Jan. 2013), in which an ancient sorcerer overruns the kingdom of Yaskatha.
• Hachette’s site has this description with a preview function.
• The Publishers Weekly review is not impressed.

Anthology of 28 stories first published in 2012, with an introduction by Hartwell and introductions to each story.
• Authors include Michael Swanwick, Robert Reed, Yoon Ha Lee, Pat Cadigan, Andy Duncan, Gregory Benford, Linda Nagata, and Bruce Sterling.
• Macmillan’s site has this description. There’s also a hardcover edition available (9780765338150).
• The Publishers Weekly review concludes, “Hartwell’s introduction laments the decline of particular elements of short SF, but this anthology makes it clear that the field is still well able to surprise and entertain.”
• Gary K. Wolfe reviews the book in the December issue of Locus Magazine in some detail, writing “David Hartwell’s Year’s Best SF 18 arrives quite a bit later in the year than his previous volumes and later than this year’s anthologies from Dozois, Strahan, and Horton, all of which I suppose, in baseball terms, places Hartwell in the enviable position of batting clean-up. Given his very specific, somewhat constructionist approach to SF as SF, his selection is as always quite independent of trends, and only a quarter of the stories in Hartwell’s anthology appeared in any of the previous year’s bests….”

SF novel, the author’s first novel and presumably first in a series, about a sky surgeon who stows away on the starship Tangled Axon, concerned that her spiritually-advanced sister is in danger.
• Masque Books’ site has this description with quotes from numerous reviews.
• This is a trade paperback edition; the e-book edition was released in July.
• Amazon’s “Look Inside” function provides previews.

Horror novel about fifteen American boy scouts and their leaders who have committed suicide, and their connection to a Polish man’s suicide during World War II.
• The publisher’s site has this description.

Short fantasy novel about a woman sitting by her father’s bed during the last hours of his life.
• This is a new edition of a book published by PS Pubishing in 2009 (978-1-906301-82-8), described here.
• Quercus has this page about the book.
• Amazon’s “Look Inside” function provides a preview (of the PS Publishing edition). 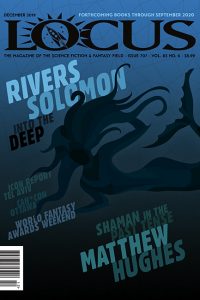 This was my first full year reviewing books for Locus. I’ve enjoyed every minute of it, even the yawning, anxiety-inducing depth of the white screen as I des­perately cobbled together something coherent to say about the books I was discussing. On that note (not the yawning depth of the white screen, but the books), I’ve read some terrific genre fiction this year. As has been the case for a decade