Nov/Dec 2013—
Vol. 125 No. 5&6 (whole #710), $7.99, 258pp, cover art by Mondolithic Studios
• This issue has a novella by Michael Blumlein, novelets by Tim Sullivan, Albert E. Cowdrey, KJ Kabza, Matthew Hughes, and M.K. Hobson, and short stories by Brendan DuBois, and James Patrick Kelly.
• Departments include Charles de Lint’s “Books to Look For”, covering titles by Stephen King and Graham Joyce; Chris Moriarty’s “Books” column, covering titles by Daniel Abraham and others; Paul Di Filippo’s latest “Plumage from Pegasus” installment, “More Than Bookman”; a “Films” column by Kathi Maio; and a “Curiosities” page by Douglas A. Anderson, covering a 1914 title by Guy Ridley.
• The issue also has results of the latest F&SF Competition, and rules for the next one. 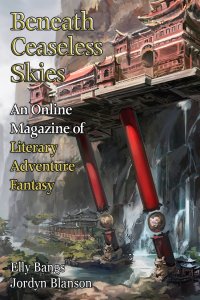 Gail Carriger was born in Bolinas, West Marin, CA. She attended high school at Marin Academy, and did her undergrad work at Oberlin College. She got a master’s of science in archaeological materials at Nottingham University in England in 2000, and went to the University of California Santa Cruz for her MA in anthropology, with a focus on archaeology, graduating in 2008. First novel Soulless debuted in 2009 and began