Robin Hobb’s Blood of Dragons debuted in first place on the hardcover list, while River of Stars by Guy Gavriel Kay debuted in second. There was no new runner-up, out of 41 titles nominated, down from the 46 we saw last month.

Triggers by Robert J. Sawyer moved up the chart to number one on the paperback list, with A Game of Thrones by George R.R. Martin maintaining its spot in second place. The runner-up was Plague Nation by Dana Fredsti (Titan) with 46 titles nominated, down from last month’s 51.

Ray Bradbury’s Fahrenheit 451 took first place on the trade paperback list this month. There was no new runner-up, with 38 titles nominated, down a bit from the 40 we saw last month.

Star Wars: The Last Jedi by Michael Reaves & Maya Kaathryn Bohnhoff moved up a spot to first place on the media-related titles this month, and there was no new runner-up. There were 12 titles nominated, up from last month’s nine.

Forgotten Realms: The Last Threshold by R.A. Salvatore rose to number one in the gaming-related titles, with no new runner-up. There were 10 titles nominated, down from the 12 we saw last month. 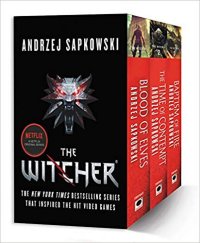 From our archivist: We’ve got exciting news! We made the Kickstarter front page and were featured on their blog in a recent post. Those developments are entirely thanks to you. The Locus team has been working hard behind the scenes to finally be able to announce: T-SHIRTS! We will be printing exclusive “backer”-only t-shirts with a cool, new Locus design to the lovely folks who’ve donated to this Kickstarter. We’re