Tanith Lee is fantastika’s Joyce Carol Oates (if you allow the stipulation that while Oates certainly contributes to our genre, she is not of it, so to speak). Immensely talented, immensely prolific, intrinsically fluent and fluid, writing all over the imaginative map, Lee nonetheless assume a kind of background permanency as an invariant feature of the landscape that allows her to be overlooked when the biggest names of fantastika are arrayed. Perhaps, like Oates, and paradoxically so, her very productivity is partly responsible for any invisibility. At her ISFDB entry, I count nearly ninety books and perhaps three times that many stories. That’s a lot for any reader to assimilate, especially a newcomer, even when spaced out over a forty-year career. (Lee’s first book appeared in 1971.)

Lee initially assumed genre prominence in 1975 with the appearance of The Birthgrave. DAW Books Number 154, I ascertain via Google just now, although everything else about buying and reading that book remains fresh in my memory. It was an exciting, feverish, obsession-laden sword and sorcery epic, unlike anything then current—or, arguably, since. Maybe if Leigh Brackett had been channeling both Robert E. Howard and Pauline Réage (The Story of O), with John Campbell’s censor Kay Tarrant taking out the naughtiest bits, Brackett might have produced something similar. All credit for launching Lee in this fashion goes, of course, to DAW’s founder, Donald A. Wollheim (1914-1990), whose other discovery of this era, C. J. Cherryh, completes that editor’s late-career triumphs.

Fittingly enough, an old, truly appreciative essay by Wollheim prefaces Lee’s new collection, Tempting the Gods. This volume, the first of several, happily offers those of us who have been fans for a while the chance to reassess her work, its range and vibrant vitality, and offers newbies a perfect entry point for a lifelong Lee habit.

“Tiger I” tells the tale of a woman journalist who goes to visit the enigmatic Mary Sattersley, rich recluse with a strange menagerie. Lee’s understated presentation perfectly shepherds the reader to the big reveal, whose impact is not diminished even if foreseen. The story as a whole resonates with the work of Ballard, Zelazny and Sturgeon, and glows like a lost New Wave gem.

“Death Loves Me” recounts the intricately intertangled lifelines of several folks from the Classical Era: Lukon, a chariot racer who senses his own imminent death; Urtemis, a rich housewife losing her husband; Tilat, Lukon’s concubine; and Red Shaizek, Lukon’s rival. The shape of their destinies reveals the hand of an ironic Fate, and recalls the fables of Thomas Burnett Swann, a writer unfortunately forgotten these days.

Saki or Roald Dahl might have composed “Anna Medea,” which concerns a rich family terrorized by a horrid son and daughter. When the governess Anna Medea comes to take charge, in a distinctly non-Mary Poppins way, all seems calm. But the father’s misapprehensions threaten to undo her good work in a most inconvenient outcome. Lee’s facility with contemporary mimesis and her black humor stand out.

“Ondralume” exhibits a kind of Robert Sheckley or William Tenn ambiance, as the seemingly disjunct narratives involving a primitive tribe and a futuristic businessman collide at the climax in a quietly spectacular fashion.

The eternal rivalry between dragon and swordsman gets a pathos-inducing twist in “After I Killed Her.” Original to this volume, “God and the Pig” is an apocalyptic fable composed of Jesus and old candy wrappers. The book’s longest entry, “The Kingdoms of the Air,” is Lee’s Arthurian Grail quest, yet with all its trophies and symbols and personages reimagined in a fresh manner. The ghost of William Morris presides benignly over the tale. Merely one paragraph long, and the oldest piece here (hailing from 1968, when Lee was only twenty-one-years old), “Eustace” is charmingly silly, like a Charles Addams cartoon.

As in most stories by Lord Dunsany that feature a thief who overreaches himself, the grave-robber protagonist of “These Beasts” comes to a most untidy end. An idiosyncratic incubus maintains a domineering homosexual relationship with a young lad named Hilton in “Cain.” Lee proves adroit at the traditional ghost story in “The Lady-of-Shallot House,” which manages to be both mournful and somehow full of satisfactory atonement. And finally, in “Where Does the Town Go at Night?”, a domestic drama between estranged parents and their son gets a supernatural resolution, as the village of the title awakens from its staid ways and goes wandering to mermaid-rich maritime realms.

Tanith Lee’s lush fiction is marked by exotic venues, precisely and elegantly invoked, populated with passionate characters whose deep emotions drive them to outstanding feats of folly and bravery, sacrifice and love. You can imagine these timeless stories whispered around an oasis campfire or in a starship’s engine room.

Tempting the Gods: The Selected Stories of Tanith Lee Volume 1 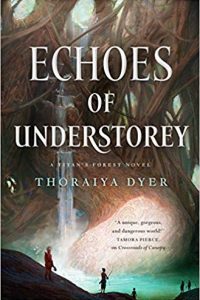 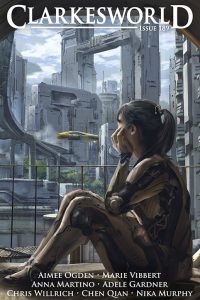