May 2013—
Vol. 133 No. 5, $4.99, 112pp, cover art by Dominic Harman
• This issue has part 2 or 4 of Edward M. Lerner’s serial “Dark Secret”, a novelette by Martin L. Shoemaker, and short stories by David W. Goldman, Walter F. Cuirle, H.G. Stratman, and Patty Jansen. There’s also a poem by Mary A. Turzillo.
• The science fact article, by Richard A. Lovett, is about asteroid mining.
• Departments include a guest editorial by Edward M. Lerner, an Alternate View column by John G. Cramer, High-Z Helium; and Don Sakers’ The Reference Library, covering titles by Steven Gould, Harry Turtledove and Rachel Turtledove, and others.
• Lois Tilton reviewed this issue for Locus Online.

March 2013—
Issue 78, cover art by David Demaret
• Fiction in this issue is by Aliette de Bodard, A.C. Wise, Genevieve Valentine.
• Neil Clarke’s editorial announces the addition of Gardner Dozois to the editorial staff, who will select two reprints per month.
• Other nonfiction includes an article by Keith Phipps about the film Videodrome, a conversation with M.C. Planck, and a column by Alethea Kontis.

February 2013—
• February’s stories are On the Arrival of the Paddle-Steamer on the Docks of V by Peter M. Ball, and Sanctuary by Susan Palwick.
• Lois Tilton reviewed the stories for Locus Online.

March 2013—
• This month’s story is Logic and Magic in the Time of the Boat Lift by Cat Rambo and Ben Burgis.

March 2013—
Vol. 12 No. 1
• Stories in this issue are by Gabriel Murray, Leah Thomas, and Sunny Moraine.
• Poetry is by Megan Arkenberg, David C. Kopaska-Merkel, Alexander Seidel, and Michele Bannister.
• There’s also an editor’s note, and book reviews by Liz Bourke.

February 2013—
Issue 32, cover art by Julie Dillon
• Stories in this issue are by M.K. Hutchins, Michael T. Banker, Barbara A. Barnett, Ian Creasey, Trina Marie Phillips.
• There’s also an interview with James Blaylock and a letter from the editor. 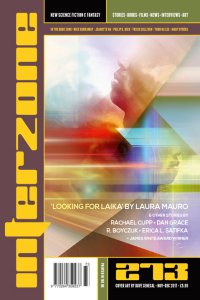 Here are comments, presented anonymously and in random order, submitted by voters in this year’s Locus Poll and Survey. Results of the poll were published in the magazine’s July issue; survey results will appear in August issue. * Keep up the great work! – Thank you for putting in all the work on this survey. – “Do you get your news…” I don’t get all my news from any one

A Journey to Remember