The long-awaited US edition (Tor UK 2011) of the first volume in Asher’s dark SF series The Owner is here at last. Set in the 22nd century on an overpopulated dystopian Earth and a Mars colony struggling for survival, this delivers Asher’s usual blend of ‘‘vivid, graphic violence; widescreen special-effects sequences; ruthless, damaged, more-than- or not-exactly-human heroes and villains… and a high-stakes conflict.’’ [Russell Letson]

The ladies of the upscale Victorian brothel (and front for a secret spy organization) Nell Gwynne’s take a summer vacation by the sea, but instead of relaxation, they find intrigue in the form of a scheming American with a dangerous plot. This novella in the late Kage Baker’s Company series was completed by the author’s sister. ‘‘The story is madcap… steampunk science fiction reduced (or should I say elevated?) to the level of opera buffa…. Baker was a true ornament to our field. She is sorely missed, and all praise is due to her sister… for preserving and enhancing her heritage.’’ [Richard A. Lupoff]

Set in a fantasy version of the Old West where the remote town of Golgotha is beset by unnatural terrors, this debut novel by a striking new voice ‘‘features a genre mix that’s very much in vogue these days: the dark and twisted Western…. Belcher takes to it like a natural, with no signs of newbie hesitation. He jumps right in!’’ [Faren Miller]

Subtitled ‘‘A Memoir by Lady Trent,’’ this charming novel is ostensibly the life story of world -famous dragon naturalist Isabella, Lady Trent, written in the style of a Victorian autobiography.

The third book in the Demon Cycle, begun with The Warded Man and The Desert Spear, escalates the conflict between former-friends-turned-bitter-rivals Arlen and Jardir. Only one of them can truly be the fabled Deliverer, destined to save humankind from a plague of demons – but as they battle one another, their common enemy grows stronger.

The beloved steampunk author turns to YA fiction for the first time with this spin-off set earlier in the world of her popular Parasol Protectorate series, with 14-year-old Sophronia shipped off to a finishing school that secretly teaches spycraft and assassination along with more refined social skills.

This sequel to the bestselling Little Brother again pits socially conscious young people in the near future against the oppressive apparatus of the security state. Hacker legend Marcus receives a drive filled with Wikileaks-style stolen secrets and wrestles with the decision of whether or not to release it online, while dangerous forces try to seize the data for their own purposes.

Twenty-three years after the publication of The Eye of the World, the late Robert Jordan’s epic Wheel of Time series draws to a close in this fourteenth volume, as Rand al’Thor finally confronts the Dark One in the prophesied Last Battle. Like the previous two volumes, this was written by Sanderson based on notes, outlines, and scenes left by Jordan, with the assistance of Jordan’s widow Harriet McDougal.

The third volume in the fantasy adventure series begun with Green follows the courtesan- assassin as she attempts to rescue two girls taken hostage by a guild, while doing her best to avoid the deadly attentions of the gods.

This collection by the celebrated author of fantasy stories set in ancient Japan provides a fresh take on the monster-hunter genre with ten stories (one original) about Yamada no Goji, an impoverished nobleman and freelance killer of demons and other supernatural threats.

This twisty, thought-provoking time-travel novella from the master of secret history combines Beat poetry, romance, rare book dealing, and the sacred texts of a dead Sumerian god. ‘‘An uncommon and engaging chamber piece from an author most often engaged in more symphonic forms.’’ [Gary K. Wolfe]

The fourth book in the Chatrand Voyage series brings the ambitious fantasy sequence to a harrowing close, as the heroes cope with the devastating magical fallout of the dark sorcerer Arunis’s death: the arrival of the demonic Swarm of Night, which feasts on death itself.

This is the first US publication of last year’s Man Booker prize finalist, a challenging and rewarding novel in the Modernist tradition with surreal elements, exploring the complicated history of a mental patient in 1971 London and a psychiatrist’s attempts to treat her. 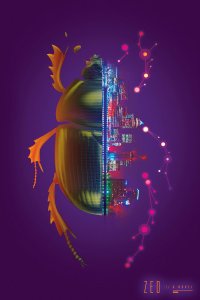