‘‘The best of all possible worlds’’ is one of those phrases whose original meaning has been clobbered by irony. A lot of readers will immediately think of Voltaire’s Dr. Pangloss, and a few might remember James Branch Cabell’s famous quip that an optimist believes this is the best of all possible worlds while a pessimist fears that it is, but I doubt very many will immediately harken back to Leibniz trying to puzzle out what God was up to in creating evil. Karen Lord’s second novel (which actually won Lord her second Frank Collymore Award in Barbados before her first, Redemption in Indigo, was even published) seems to come down more in the direction of Voltaire, but notably without the bitter irony of Candide. Not that there aren’t plenty of grounds for bitterness: The Best of All Possible Worlds begins not long after a genocidal attack on the home planet of the Sadiri has rendered it uninhabitable, leaving the few survivors seeking to preserve their culture and bloodlines by finding the remnants of an earlier diaspora scattered over several planets. Their mission is not one of vengeance against the home planet of the perpetrators, as in Greg Bear’s Anvil of Stars; as the novel opens, the culprits have already been mysteriously quarantined from the rest of the universe. Instead, the Sadiri have set about establishing homesteads – almost all male, since few Sadiri women survived – on the frontier planet Cygnus Beta. A leading diplomat named Dllenahkh undertakes to visit various cultures on Cygnus Beta, hoping to find individuals, especially women, who share such ancestral Sadiri traits as a telepathic sensitivity and who might be willing to intermarry to help preserve the Sadiri’s genetic heritage. His guide – and the narrator of most of the chapters (those focusing on the point of view of Dllenahkh are in third person, in keeping with his reserved, somewhat secretive personality) – is a biotechnician named Grace Delarua, who is initially somewhat resentful of an assignment that will take her away from her promising research career.

Obviously, this is a far cry from Redemption in Indigo, or from what admirers of that novel might have been expecting. There are some resemblances to Candide in the episodic and sometimes disillusioning journey which makes up the bulk of the narrative, but what is more striking is the degree to which the novel reveals Lord’s insightful familiarity with SF concepts that date back at least to the 1960s, with novels like Alexei Panshin’s Rite of Passage and especially Le Guin’s The Left Hand of Darkness. As in Le Guin’s Ekumen, there are several varieties of humanity – Terrans, Sadiri, Ntshune, Zhinuvians – and a persistent belief in a wise, ancient society of guardians called the Caretakers. The somewhat formal diplomatic reserve and status-consciousness of the telepathic Sadiri even suggests an odd combination of Le Guin’s shifgrethor and ‘‘mindspeech,’’ but – thanks largely to the free-spirited, sometimes almost girlish narrative voice of Grace – the novel takes on a loose, almost playful tone. Grace is given to such expressions as ‘‘How cool is that?’’, blisses out over chocolate cake (‘‘Now, this was a drug worth taking!’’), and even compares a particularly hair-raising adventure to an Indiana Jones vid. Dllenahkh, on the other hand, sounds and acts like the unworldly, uptight professor from a dozen screwball comedies (and who survives in demeaned form in certain modern sitcoms). Given an alcoholic drink, he says, ‘‘This beverage is delicious. May I have another?’’ and when he discovers the unfamiliar custom of kissing, he remarks, ‘‘I am beginning to see the value of the practice.’’

So in the same tale, we have a sharply insightful anthropological interrogation of cultural mores and the effects of diaspora, and a pair of mismatched leads whose relationship and dialogue might have seemed familiar to Howard Hawks. I don’t think I’ve quite seen anything like this combination in SF – a light romantic comedy in the shadow of a tragic apocalypse – but it ends up working better than you think it will. Grace gains depth and complexity when one of their early journeys leads her to a painful visit with her sister, whose husband Grace had once been involved with, and with her beloved nephew, caught amid old family resentments. The various settlements she and Dllenahkh visit include one modeled on old Earth folklore, complete with a Faerie Queen; another is ruled by a creepy dictatorial figure called The Master, who runs his fortress-like redoubt like a brutal company town, effectively imposing a form of legalized slavery. The latter leads Grace to face what is perhaps her greatest ethical crisis, and even to risk her entire career as a diplomat, lending an almost heroic status to her character.

Throughout, Lord alludes to earlier SF traditions, at times imparting an almost retro flavor to the novel. Telepathy and telekinesis have been comparatively rare in SF in recent years (though as we noted last month, they seem to be thriving in horror fiction); Lord ingeniously uses them not only to explore her recurrent concern with the ethics of interpersonal relations, but also to delightful comic effect when Grace finds her dreams channeling dialogue from Casablanca while Dllenahkh and his colleagues are watching the movie in another room. We are told that the elite Sadiri pilots merge psychically with their ships, echoing Cordwainer Smith and others, and Ray Bradbury’s title ‘‘Dark They Were, and Golden-Eyed’’ becomes a catchphrase shared by Dllenahkh and Grace in their developing romance. The Best of All Possible Worlds may at times be trying to do too many things at once, some of which are pretty familiar, but Lord’s own graceful prose, ingratiating characters, and palpable love of SF knit it all together in a satisfying – and adventurous – departure from expectations.

The Best of All Possible Worlds 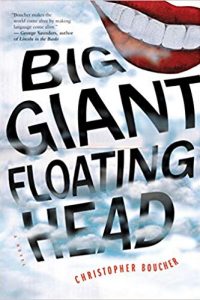