The ninth SF novel in the Culture series focuses on a race ready to take the next step into the Sublime state – if certain religious conflicts can be resolved, a problem that sends investigators looking for the incredibly ancient individual who composed ‘‘The Hydrogen Sonata’’. ‘‘You can skip the philosophy and enjoy a long, complicated, entertainingly detailed, funny, smart adventure story. But the philosophy is just as much fun and just as exciting.’’ [Russell Letson]

This substantial collection weighs in with 28 stories chosen as the best from ‘‘a brilliant satirist, perhaps the best in SF… [this] will certainly make my shortlist of the best collections of the year.’’ [Gardner Dozois]

This madcap Hollow Earth adventure features intrepid preteen cryptozoologist Kathleen Perkins and her cousins, and their uncle’s magical Cadillac called Zeuglodon. ‘‘A treat for readers both young and old, setting elements of classic SF, fantasy, and YA in the world of [Blaylock’s] early work The Digging Leviathan.’’ [Faren Miller]

The acclaimed editorial team presents 19 original YA stories of apocalypse and dystopia by an impressive roster of authors including Gregory Maguire, Nalo Hopkinson, Jeffrey Ford, and Garth Nix.

Doctorow again speaks out for freedom of information, this time in an entertaining, often gritty tale of a teen who runs away to the London underground to follow his illegal passion for making movies from sampled downloads.

From an author best known for his hefty novels, Hamilton’s second collection presents seven stories, three set in his popular Commonwealth Saga, including the title novella featuring investigator Paula Myo. Originally published in the UK by Macmillan 10/11; this is the first US print publication, with a Del Rey e-book announced for 2/12.

McDonald mixes things up by adding aliens and alternate worlds to this YA steampunk SF novel, second in the Everness series after Planesrunner. ‘‘McDonald has used the many-worlds trope in a far more interesting way than most writers, and his invention shows no signs of flagging.’’ [Gary K. Wolfe]

This collection presents a varied selection of 16 fantasy stories from the last two decades, plus a speech on ‘‘What Inspires Me’’ by one of the ‘‘acknowledged masters of the field.’’ [Faren Miller]

A very Dickensian London provides a fascinating background for Pratchett’s latest YA effort, a lively historical fantasy set in a slightly alternate Victorian England where the boy sewer-scavenger Dodger rescues a girl and unexpectedly finds himself involved with Charles Dickens and other notables.

Two young women, both brilliant mathematicians in 1817 London, must decide whether to team up to battle the fallen angel that holds the lost land of Yount in this young-adult fantasy alternate-history novel, sequel to the critically praised The Choir Boats.

Suspense, humor, and ideas mix in this fantasy novella about a man with multiple personalities only he can see, each with highly specialized skills, and his investigation into the disappearance of the inventor of a camera capable of taking pictures of the past.

The latest volume in Subterranean’s comprehensive chronological collection of Silverberg’s short fiction weighs in with ten stories, including the Hugo-winning ‘‘Enter A Soldier. Later: Enter Another’’, accompanied as usual by Silverberg’s enlightening comments on the art and business of writing.

An engineered virus destroys the world’s oil supply in this apocalyptic near-future SF novel. ‘‘When the imagination that devised both ‘‘The Phantom of Kansas’’ and ‘‘Press Enter []’’ digs into some of the genre’s oldest perennial questions (What will we do when the lights go out and things fall apart?) the resuls are just as gripping, terrifying, and convincing.’’ [Russell Letson]

Williams’s turns to urban fantasy with a touch of noir and a distinctive take on theology for this tale of doubting angel Bobby Dollar, advocate for the souls of the newly deceased, who gets caught in a complicated mystery involving disappearing souls and some major players in both Heaven and Hell. 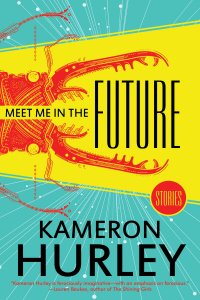 Stina Leicht was born March 29, 1962 in St. Louis MO. She attended Sam Houston State University and the University of Houston, and returned to school to study 3D animation at Austin Community College in 2003, graduating in 2006. She has worked as a graphic designer, a bookseller, and in the gaming industry, and has been a full-time writer and freelancer since 2005. Her debut novel Of Blood and Honey,