Harry Markov is an author and reviewer specializing in weird fiction.

Despite my good intentions, I have never served as a connoisseur of international fiction, given I own a small tomb of books I’ve been building since I first started reading in English. English still possesses my imagination in its entirety and I have yet to oversaturate my yearning for books by English speaking authors. The sole and striking exception to my reading habits is the collection of short stories penned by the Bulgarian author Angel G. Angelov titled The Act of  Walking on Water published in 2009.

Every title in my review remains an unsure effort on my part to translate as The Act of Walking on Water has been published exclusively in Bulgarian without an official translation (I’m more than interested to help translate the  collection and in my wildest dreams Jeff VanderMeer e-mails me to make this happen) and in one limited run, all stuff hipster dreams are made of. In short, Angelov’s work is essential, because it successfully blurs genre lines and is what I’d call a continuation of the ‘weird’ literary movement wrapped in the sexual throws of magical realism. It’s a bold claim based more on my emotional response to his imagery and treatment of each situation narrative-wise rather than any  extensive back-reading and experience in both movements.

Reading The Act of Walking on Water resembles stepping into an ocean. Angelov’s sentences have attained the fluidity of water through the stream-of-consciousness, which can occupy pages at times. Paragraphs pull you deeper towards the depths. His thoughts are slow, monolithic and the motions of his stories, much like a tide, overcome you with their heaviness. What I love is how Angelov dilutes time, erases names, denies his characters identities, creating effective archetypes in the process, and binds them with concepts.

In “Virtual Love”, a man named Levkadi has been trapped behind his desk for millennia as he searches for a beloved. His story is a tragic one as the woman he’s dying to establish connection with has overpowering sexuality and fatalism, the archetype of the femme fatale. He waits, she taunts and this cycle stretches beyond the confines of time as they’re locked in this dysfunctional imitation of relationship. The nature of Levkadi’s name (a reference to the Leucades, cliffs from which those unlucky in love would jump in Ancient Greece to commit suicide) prompts him to jump from his window and meet his end.

This opening story manages to effectively transform something as overdone into a metaphysical occurrence of great significance. After this story, Angelov grows in magnitude and fuels stories with a unique brand of intellectual erotica, philosophical monologues and warped realities. He rewrites the world as a place of eternal fornication between a man and woman, who force Time itself to stop and insert herself in their passions (“The Ascension of Night”); constant transformations as the woman, who becomes an angel in “Different Love” or the mermaid, who sheds her skin, to engage in a perpetual sexual intercourse with the sailors in “The Sounds”; and a timely orgy in a bus with an infinite road ahead in “Sinking in the Night”. The stories are both cold and detached in their delivery as Angelov drives home his point and comments on certain aspects of human nature, but run hot with a consistent, sometimes tasteful, sometimes devious
sexual charge.

The Act of Walking on Water explores what it is to be human with all the flaws, virtues, lust and desires, however, not focused on the ‘now’, but on the ‘ever’ with a slight nod to the Lovecraftian philosophy of cosmicism. 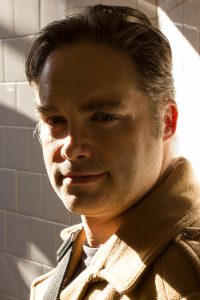 One thought on “The Act of Walking on Water”