This sequel to Passion Play continues the River of Souls series, rich in political intrigue, romance, and dark magic, set in a Renaissance-influenced world where people can be reincarnated and retain fragmented memories of their past lives. ‘‘Bernobich turns the quest saga into a crazy-quilt of intimate portraits – the perfect antidote to those bombastic info-dumps some publishers still tout as the latest thing in fantasy.’’ [Faren Miller]

Daniel Abraham & Ty Franck return for this collaborative follow-up to Leviathan Wakes, further exploring the world of their Expanse trilogy, set in a future where humanity has spread throughout the solar system. ‘‘There’s no need to wait for Act III, or even to read Act I first – Caliban’s War is sufficiently self-contained and satisfactorily resolved to be read on its own. And it’s too much fun to be kept waiting on the shelf.’’ [Russell Letson]

The reigning heavyweight among the year’s bests collects 35 of the most outstanding stories from 2011, including work by Peter S. Beagle, Elizabeth Bear, Kij Johnson, Ken MacLeod, Maureen McHugh, David Moles, Michael Swanwick, and Catherynne M. Valente; plus Dozois’s invaluable, in-depth look at the year in SF.

In this masterful modern fantasy by one of our most accomplished authors, a young woman who disappeared in the forest returns to her family 20 years later, hardly aged a day, and draws everyone she knows into the ambiguous mystery of her missing years. ‘‘Few writers today can match Joyce in… conveying the fantasy of ordinary life or the ordinariness of the fantastic…. This time, people, pay attention.’’ [Gary K. Wolfe]

Two major talents have joined forces to launch a new series set in a multiverse of alternate Earths. ‘‘With its entry-level notion of multiple Earths, its set of game-like rules defining what can and can’t be done with those worlds, its sequence of adventure scenarios… and its hints of Mysteries Yet to be Revealed, [this] might make an excellent introduction to the concept for young readers.’’ [Gary K. Wolfe]

In a future 150 years from today, the scion of a wealthy family is uprooted from his life studying elephants in Africa to travel to the moon – and on to the outer reaches of the solar system – to unravel a mystery uncovered by the death of the family matriarch. ‘‘If Reynolds can keep this up – and there’s enough planted here for future volumes to already suggest that he can – he might have one of the most enjoyable series of the still-young decade.’’ [Gary K. Wolfe]

Roberts penned this hilarious novelization of an unproduced ‘‘lost’’ script for the Doctor Who TV series written by Douglas Adams during his tenure as script editor for the program, from 1978-79. The time-traveling Doctor has to recover an artifact of unimaginable power before it falls into the wrong hands.

Silverberg was a frequent contributor to the 18 issues of Super-Science Fiction published from December 1956 to October 1959, and he has selected the 14 best stories from the magazine’s run for this anthology, featuring work by himself, Robert Bloch, A. Bertram Chandler, James E. Gunn, Alan E. Nourse, Henry Slesar, Jack Vance, and others. Also includes illustrations from the magazine by William Bowman, Ed Emswhwiller, Frank Kelly Freas, and Paul Orban.

This sequel returns to the alternate-historical fantasy world of debut novel Bitter Seeds, moving forward two decades from WWII and on into the Cold War. Spy Raybould Marsh is drawn into an investigation to find out who’s murdering Britain’s warlocks, bringing him into conflict with escaped prisoners of war altered by the Nazis to develop superhuman powers.

The author best known for his sweeping epic fantasies demonstrates his facility with the short form in this collection of a dozen stories, including original ‘‘Black Sunshine’’, plus a story set in the world of Jack Vance’s Dying Earth, and the script for his unproduced comic book series Bad Guy Factory.

The acclaimed writer of graphic novels turns to long-form prose with this near-future Arabian urban fantasy about a computer hacker – known as Alif – who goes on the run from his country’s security apparatus and discovers a secret, unseen world of jinn.

The author of How to Live Safely in a Science Fictional Universe shows off his skill at short fiction in this collection of 13 stories, six original, which deploy the tropes of SF, fantasy, and horror in the service of satire and social commentary. 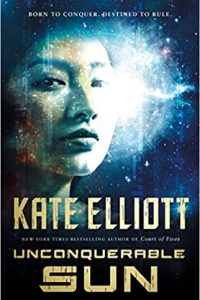 The 19th Annual/5th International Science Fiction Conference was organized by the Indian Association for Science Fiction Studies Bangalore (IASFS) in collaboration with Bangalore University and held online December 7-10, 2020. The theme was “All Roads Lead to Science Fiction”, and participants included members of 58 departments at the university, faculty from 700 affiliated colleges, scientists, authors, editors, journalists, and luminaries from all over the world. A variety of activities and