Over the past several years, young-adult fiction has become such a ubiquitous part of SF and fantasy that there’s hardly any point in separating it from the mainstream of the genre, but in a way this isn’t a new development at all, and probably isn’t driven entirely by the vague hope of post-Potter, post-Hunger Games riches. In fact, it’s a little like coming home. Back in the Victorian period, when adult fiction was almost straitjacketed into a prescribed form of domestic realism, the ‘‘children’s’’ market produced an impressive flood of classic fantasy stories, and the authors knew it. George MacDonald, for example, was widely respected as an author of now-forgotten Scottish regional novels, but what we read today are his fantasies, mostly originally for children. A half-century later, C.S. Lewis could write serious, moralistic adult fantasies like Till We Have Faces, but how many current readers have heard of that compared to Narnia? And still more recently, Paolo Bacigalupi snagged just about every award the SF field had to offer with The Windup Girl, but it was his YA Shipbreaker that got him on the National Book Award ballot. YA fiction, it seems, is a way of avoiding not only the constraints imposed by a formula-driven adult commercial market, but of avoiding the stigma of genre at the same time. How many people outside our own community even think of The Hunger Games as SF?

So it wouldn’t be surprising if some authors were to find this freedom imaginatively liberating, and that certainly seems to be the case with Nalo Hopkinson. The Chaos, her first YA novel, begins modestly, with a familiar tale of a girl transferring to a new school in Toronto and trying to fit in. Only a couple of fantastic elements are introduced in these early chapters, and they’re fairly restrained and possibly even hallucinatory: Scotch, the protagonist, has visions of disembodied horses’ heads dancing around in mid-air, and she suffers from an unexplained skin condition in which black, tarry patches appear and grow despite the various doctors she consults and ointments she tries. Hopkinson has always been skilled at portraying outsiders sympathetically but without sentiment, and what we learn of Scotch (much of it initially presented through the rather contrived if efficient device of having her answer questionnaires for class) suggests she desperately wants a new life at the new school, but is sometimes her own worst enemy. She’s the most talented member of the school dance team, but frequently misses practice and messes up her timing on a key routine for an upcoming competition. She’s resentful that her parents actually sent her brother to jail on a drug charge, but she’s the one who ratted him out in the first place. She’s dumped an attractive boyfriend who still cares about her, and worries that she might be going nuts.

That last concern becomes moot about a third of the way in, when the novel shifts gears so abruptly that some readers might risk whiplash. Scotch accompanies her brother to an open-mike poetry reading at a downtown bar (where he flops completely, in an excruciatingly well-written scene), and notices that the Horseless Head Men appear to be everywhere. An iridescent bubble appears near the stage, growing rapidly, and for once it’s something that everyone else can see as well. Scotch dares her brother to touch it, but when he does both he and the bubble disappear. Soon after, Scotch herself is down the rabbit hole – except that it appears to be a kind of subway train with living intestinal walls, and she’s surrounded by people with bandicoot heads, arms made of smoke, and jointed metal legs. A friend she had met in the bar has turned into a purple triangle with an elephant’s trunk, and Scotch herself has 11 legs that look ‘‘like half-melted black rubber.’’ And this only scratches the surface of the manic transformations that will come to be known as The Chaos. A volcano suddenly rises from Lake Ontario and begins to erupt. Sasquatch wanders through the streets, as does the chicken-footed walking house Izbouchka from the Baba Yaga legends. Scotch’s brother seems to be trapped, disembodied, in the mobile phone network.

There is a long tradition of fantasy stories in which agents of a collective unconscious, or mythagos (to borrow Robert Holdstock’s useful term) erupt into the world to create chaos, and Hopkinson seems to be having a lot of fun seeing how many different cultural traditions she can draw on (after all, if Toronto is such a diverse community, its mythic substrata might as well draw from all the different elements of the population). So, along with Sasquatch and figures from the Russian Baba Yaga tales, Hopkinson draws on Jamaican legends (the ‘‘rolling calf,’’ a kind of duppy), Algonquin mythology (the volcano is named Animikia), Anansi and Brer Rabbit folklore, and quite a few images, such as a lavender hippopotamus wearing a party hat, that are just wildly surreal in a sort of Beanie Baby way. And, we are given to understand, The Chaos isn’t simply a local Toronto phenomenon, but is world-wide – and it can lead to real-world fatalities. What keeps this all from spinning completely out of control is Hopkinson’s clear focus on the anxieties and emerging courage of Scotch, who finds herself tested in ways that are partly familiar from any number of fantasy or YA fictions, but who proves to be a compelling anchor for a tale in which, for a while at least, it seems that literally anything can happen. Hopkinson’s joy of invention is palpable, and despite its darker edges, it’s that joy in the possibilities of the imagination that I hope comes through to younger readers. Come to think of it, we could all use a dose of it. 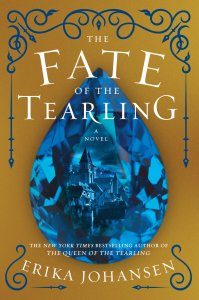 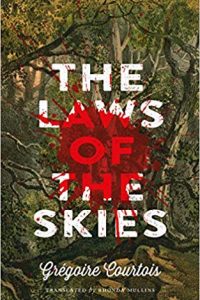 Ian Mond Reviews The Laws of the Skies by Grégoire Courtois