Gary Westfahl’s illuminating and entertaining new study of a certain subset of SF films could not have been released at a more useful or propitious or significant instant in history. With the space program of the USA at a watershed moment of retrenchment and reassessment (hopefully segueing into a renaissance) and the space programs of other nations ramping up, not to mention the debut of exciting private ventures such as the Planetary Resources asteroid-mining scheme, Westfahl’s deeply considered, deeply researched survey of cinematic depictions of our species in space, using the talismanic icon of the spacesuit, crystallizes just how far our attitudes toward space exploration have come in the past century, and how far they have to go, and in which direction. This book easily might assume a larger cultural stance than merely straddling the entertainment fields of movies and books.

As the subtitle to this volume indicates, Westfahl will venture back almost to the dawn of cinema to examine the presence of spacegear in films as the defining touchstone of a certain sensibility and focus. But before then, in an amusingly named preface, “Pre-Flight Briefing,” he outlines with great clarity the reasons why he feels the spacesuit is the defining motif of a certain serious-minded speculative vision. His insights, I find, represent a very clever and striking perception and distinction not previously noted or vocalized by critics within the field. Westfahl convinces the reader at once that his theme is valid. He narrows his remit to certain films, dismissing others—”pseudo-spacesuit films”—with good logic. And he outlines the periods of study.

The next chapter, titled “First Flights,” finds only three worthy entries from the first half of the twentieth century. Himmelskibet, Frau im Mond, and Kosmicheskiy Reys. Inclusion of this last-named film, the rarest, illustrates Westfahl’s dedication and reach, as he winkles out relevant material in the most hidden niches.

At once, the reader feels in good hands with Westfahl for a couple of reasons. His plot descriptions of each film are entertaining, succinct and vivid, giving the reader a good grasp of perhaps unseen or unfamiliar material. Moreover, Westfahl exhibits a dry humor, a droll scholarship which seems like the writings from some more sober-minded big brother to Bill Warren, famous for his gonzo guide to SF of the Fifties, Keep Watching the Skies!. And Westfahl does not focus narrowly on just the films as standalone artifacts, but rather embeds them in the culture and history of their times, often giving great anecdotes relating to creators and their creations.

The following chapter, “The True Frontier,” is in a certain sense the core of the book, since it describes the subject matter at its initial peak of crystallization, when films such as Heinlein’s Destination Moon broke virgin territory in realism and scope. Westfahl widens his remit to television shows here, devoting, for instance, a comprehensive section to the sixteen broadcast hours of Men into Space. Then, we see, much as the SF digest magazine market collapsed around the same period, so does the market and audience for such films.

So, where next? To “Wild Adventures,” Westfahl’s examination of “melodramatic” spacesuit films that nonetheless contain tidbits of wonderfulness. This chapter and the next one—”Ships of Fools,” which looks at comedic SF—are typical of Westfahl’s ability to sort gems from dross, and his willingness to open-mindedly consider everything, no matter if it’s as silly as Don Knotts’s The Reluctant Astronaut. Wrapping up his detour from the pure quill with “Space Frights,” those films with a horror focus, Westfahl summarizes his distinctions with this keen assertion: “Thus, melodramatic and humorous spacesuit films encourage people to travel into space because it is comfortingly familiar, whereas horrific spacesuit films urge people to shun space because it is disturbingly unfamiliar. They all prod people to embrace what they know and avoid what they do not know—space itself, accurately portrayed only in genuine spacesuit films.”

Breaking out non-Anglo-American films into their own chapter, “Parallel Flight Paths,” Westfahl offers what will certainly be lots of fascinating information unknown to even dedicated fans. Not in that exact category, but still vastly interesting, is his take on the famous Toho Studio films such as The Mysterians.

At last in “From Reel to Reel: The Rebirth and Death of the Films,” we hit the mature period that culminates in 2001: A Space Odyssey, “the crowning achievement in the tradition of spacesuit films,” says Westfahl. By this time, the reader is fully primed for Westfahl’s masterly analysis of the Kubrick-Clarke opus. Then comes a brief coda concerning everything since—”Return to Earth: Films After 1969″—where Westfahl makes a valid case for the vanishment of the hardcore spacesuit film.

Any lover of SF in either its print or film forms is going to find this valuable survey hard to put down for sheer readability, and will come away immensely enlightened about patterns and themes that were heretofore invisible, though they were right before our eyes. 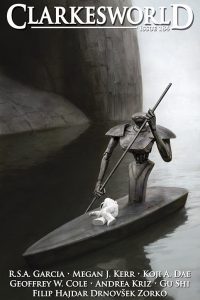