Epic fantasy novel, second of a series following The Dragon’s Path, about an orphan girl and former general in the midst of war.
• The author’s site has this description.
• Amazon’s “Look Inside” function provides a preview.
• Publishers Weekly gives it a starred review: “Abraham builds on The Dragon’s Path to create and sustain a rich, satisfyingly complex epic fantasy.”

Fantasy novel, third of a trilogy following Jack of Ravens (2006 UK, 2012 US) and The Burning Man (UK 2008, US 2012), about an archaeologist who is transported to Celtic Britain of 2000 years before his birth.
• Pyr’s site has this description.
• The Publishers Weekly review concludes, “Chadbourn produces a merry mélange of mythological and invented beings wrapped around an egalitarian ethos that ennobles hardships and promises ‘magic, not money.'”

Fantasy novel set in the Malazan Empire, the world co-created by Esslemont and Steven Erikson, author of the 10-volume Malazan Book of the Fallen series.
\
This is the fourth book by Esslemont, following Stonewielder (2010).
• Tor’s site has this description with an excerpt.
• The Publishers Weekly review concludes, “Subplots too dense to summarize will make sense only to longtime fans, but those familiar with the series will find this a worthy and satisfying installment.”

Vampire novel and political thriller, third in a series following the author’s first novel Blood Oath (2010) and The President’s Vampire (2011), about a 140-year-old vampire who has been personal aide to the US president since the Andrew Jackson era.
• Amazon’s “Look Inside” function provides a preview.
• The Publishers Weekly review concludes, “Farnsworth keeps the twists and explosive violence coming, keeping readers in suspense until the very last page.”

Anthology of winners and runners-up for the Nebula Awards presented in 2011 for works first published in 2010.
• This volume, now with Pyr — last year’s volume was published by Tor, previous volumes by Roc — includes winning stories by Kij Johnson, Harlan Ellison, Eric James Stone, and Rachel Swirsky, plus excerpts from Connie Willis’ winning novel Blackout/All Clear and Terry Pratchett’s Andre Norton Award-winning novel I Shall Wear Midnight.
• Other stories are by Geoffrey A. Landis, Chris Barzak, James Tiptree, Jr. (winner of the Solstice Award), Shweta Narayan, Adam Troy-Castro, Aliette de Bodard, and Amal El-Mohtar. There are also poems by Kendall Evans & Samantha Henderson, Howard V. Hendrix, and Ann K. Schwader.
• Pyr’s site has this description with a list of contributors.
• Publishers Weekly gives this a starred review: “From the cover by Nebula-winning artist Michael Whelan to the very last page, this remarkable anthology is filled with the very best of the SF and fantasy published in 2010.”

Fantasy novel, new book in the universe of the Imager Portfolio trilogy — Imager (March 2009), Imager’s Challenge (Oct. 2009), Imager’s Intrigue (2010), and Scholar. (2011) — where some have the magical skill to visualize things and make them real.
• Tor’s website has this description with an excerpt.
• Amazon’s “Look Inside” fuction provides a preview.

SF novel, first of series, about a spaceship captain who wakes after 12,000 years of cryogenic freezing, becomes captain of an FTL starship, and is captured by an exiled religious sect while on a mission to search for extraterrestrial intelligence.
• Amazon’s page has a description, and its “Look Inside” function provides a preview.
• Amazon also has the Booklist review, which comments, “Tonally, the novel is a bit uneven: sometimes it sounds like a space opera (suggesting such authors as Alastair Reynolds and Neal Asher), and at other times like a light comedy. On the other hand, the story is captivating, full of imaginative technologies (interlinks, thresholds, and some very nifty personal weaponry) and inventive characters…”

SF novel set in a future colonized solar system, focusing on a Mercurian artist and a Saturnian diplomat.
• Orbit’s page for the book has an excerpt and an interactive feature on how to build an asteroid terrarium.
• John Scalzi’s blog posted The Big Idea: Kim Stanley Robinson today, in which the author describes the genesis and development of the novel.
• Publishers Weekly gives it a starred review: “Robinson delivers a challenging, compelling masterpiece of science fiction. … Robinson’s extraordinary completeness of vision results in a magnificently realized, meticulously detailed future in which social and biological changes keep pace with technological developments.”
• Gary K. Wolfe reviews it in the May issue of Locus Magazine: “2312 is as flat-out a celebration of the possibilities of SF as I’ve seen in years… Readers who want only the clean narrative arc of the planet-saving space opera that anchors the narrative might find a good two-thirds of the novel a distraction, but for the rest of us it’s a catalog of wonders.”

Supernatural thriller about a New York magician who’s part of a group of psychics who foresee the future to help prevent crimes.
• Tor’s site has this description with an excerpt and quotes from reviews.
• Amazon has the Booklist review, which concludes, “The novel smartly folds the spirit world and elements of the occult into sophisticated hacking and modern crime fighting to create compulsively readable, genre-spanning suspense fiction.” 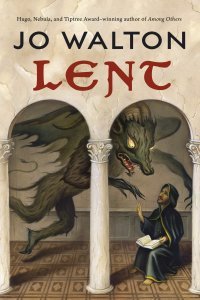 The 40th International Conference on the Fantastic in the Arts (ICFA) took place March 13-16, 2019 at the Orlando Airport Marriot Hotel, with a theme of “Politics and Conflict.” Academics, writers, publishers, editors, artists, students, independent scholars, and more participated, with about 480 people attending (up from 457 last year) and about 285 either presenting a paper or appearing on a panel (down from 306 last year). G. Willow Wilson