Karl Schroeder can’t seem to stay away from Virga, the splendid Big Smart Object setting that started off as an excuse to write about flying zero-gee pirates, floating wooden cities, and revenge. But he also managed to pursue several of his more abstract interests, viz., the nature of nature, the nature of technologies, the technologies of nature, the varieties of post-human experience, and the possibility of rational social organization. It’s as though every Nifty Idea generated a plot-twist, which spun off an even Niftier Idea, which opened even more story options, which invited further elaboration – well, you get the idea. Or the Ideas.

Ashes of Candesce follows Sun of Suns, Queen of Candesce, Pirate Sun, and The Sunless Countries as the fifth and closing (says the author, though I’m taking no bets) volume of adventures set in and around Virga, a 5,000-mile-diameter balloon of air, water, ice, artificial suns, floating cities, and exotic critters, located somewhere out around Vega in the far, far future. I should warn those who are not caught up with the series that this review includes possible unavoidable spoilers about the nature of Virga and its neighborhood: the earlier books gradually revealed that outside Virga’s skin, something called Artificial Nature is the dominant force in the inhabited galaxy, and that AN wants to absorb Virga. That means getting control of Virga’s central sun, Candesce, which generates a field that suppresses the technologies that sustain AN and other advanced post-human systems. Nor is Virga’s bubble-habitat environment unique – it is coupled to a neighboring bubble, Aethyr, where some of the series’ characters found themselves stranded at the end of The Sunless Countries.

That’s where the main action picks up, with former (one might say escaped) university historian Leal Maspeth and some fellow survivors trudging across the frozen inner skin of Aethyr, looking for a way out while dodging icefalls and the unwanted ‘‘assistance’’ of a creature that looks like a dead friend but probably isn’t, at least not entirely. Leal and her companions take shelter with a group from outside Aethyr and Virga, refugees from the attentions of Artificial Nature who call themselves the Renaissance. This group is camped out in Brink, an otherwise uninhabited ‘‘metropoloid,’’ while working on some mysterious project that requires the various technologies that Candesce suppresses but that operate in Aethyr. The project is mysterious because we see it mostly through the eyes of Kier Chen, who initially presents as a child but, as is gradually revealed, has a stranger status and condition. Kier wants to escape from his nannies and is secretly building – or, to be precise, growing – the devices needed to do so. But why he wants to run away is something that unfolds only later, inside Virga.

Meanwhile, Antea Argyre, dismissed from the secretive and half-mythical Virga Home Guard, is looking for Leal and, by extension, for answers to various questions that had led Leal off into the dark and cold places at Virga’s skin. Elsewhere, governments and diplomats gather and discuss the recent upheavals, fleets assemble and jet off to undisclosed destinations, and the movers and shakers from earlier books – admirable Admiral Chaison Fanning, his wily and wildly adventurous wife Venera, and revenger-turned-sun-lighter Hayden Griffin – are right in the middle of it all, along with some new and dangerous operators. Artificial Nature has sent in agents and gained allies, and some Virgans are engaging in counter-maneuvers aimed at advancing their own ambitions, so there’s enough double-dealing to make it a challenge to keep track of all the players even with a program.

Because schemes and puzzles have been staples of these books from the start, one expects to encounter hidden agendas, mixed motives, secret histories, confused or conflicting loyalties, concealed plans, and unmaskings. But alongside the engagingly busy cut-and-thrust of the intrigue plot runs an equally intriguing component of the book – the play of ideas and science-fictional inventions that make this more than a cunningly engineered thrill ride – and a deeper kind of fun starts when those plot secrets and revelations connect with that layer. The biggest, baddest ideas revolve around Artificial Nature and the post-human and post-post-human conditions, notions that Schroeder has been playing with since Ventus. The Renaissance refugees represent one level of post-human existence, with their extensively re-engineered bodies and minds and their semi-autonomous technologies. Even Kier, who lacks full adult status, has a sensorium extended by swarms of remote ‘‘dragonflies’’ and a mentality enhanced by the ‘‘collection of processors, communication systems, and interfaces’’ called scry. Thus he experiences a kind of amputation when he gets to Virga and no longer has scry or his fireflies – but he also discovers new orders of experience.

The world that Kier’s people left was even more thoroughly and elaborately enhanced, to the point that even plants might have a socio-technological complex to protect them:

Woe to the gardener who tried to dig up a box tulip. At the first cut of the trowel their planetary mesh network would go on high alert. Tulip sirens would go off all over the neighborhood…. The tulip consortium’s AIs would harass you by tagging your scry with insults and slanderous accusations. Their shell companies and corporations would hire lawyers and sue you.

Don’t even ask what happens if you piss off the oak trees. This blurring of the boundaries between the made and the grown, the sentient and the non-sentient, the virtual and the real, and eventually life and non-life is part of the problem represented by Artificial Nature, which might be seen as the Rapture of the Nerds run amok.

All this clearly places Schroeder’s work in discussion with that of Greg Egan, Kathleen Ann Goonan, Ken MacLeod, Charles Stross, and Vernor Vinge, among others. And like most of these writers, Schroeder is also interested in systems of governance and political organization. We don’t see the focus on revolution or the ‘‘rights currency’’ that figured in earlier volumes, but there are observations on various related matters. On the question of moving people to action, Chaison Fanning explains that the big problem is velleity: ‘‘having a vague desire to do something, but not enough will to actually do it.’’ And because ‘‘you can’t worry people into acting,’’ he proposes as a ‘‘first tool… outrage and excitement.’’ He must have been watching the 2012 election cycle. The book is studded with similar observations and explanations, as when Antea Argyre explains, ‘‘Tyranny is shaped by the command-and-control mechanisms that are available – and not by the specific class that tries to use those means. So, in Virga, we are doomed to live lives straitjacketed by bureaucratic governance.’’

But this is still a grand flying-pirate-ship-chases-and-escapes-and-meetings-with-monsters adventure, and it ends not with a debate or a seminar but with a gigantic zero-gee battle around Candesce, a climactic unmasking and showdown, just desserts, and other satisfying stuff. In a recent (as I write this) Locus Roundtable post, Karen Burnham posed the question of the appeal of SF and fantasy – ‘‘Why do you enjoy this crazy brand of literature?’’ I responded with several paragraphs of babble, but I think I could have just offered this series as my answer. 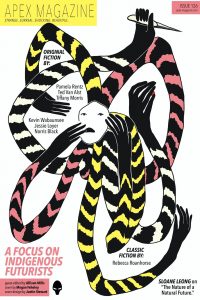