Star Trek: How Much for Just the Planet?

This is my last Yesterday’s Tomorrows column, at least for the moment. It’s been six years since Charles Brown first invited me to write them, and it feels like time for a break. I’m enormously grateful to him for the opportunity, and to Liza Groen Trombi and the rest of the team for their continued support. I very much hope to reappear in these pages before too long. Liza has kindly allowed me an indulgence: a final column on an author whose work I love, but whom I might not otherwise have been able to justify writing about.

John M. Ford (1957-2006) had a career that appears, at least from the outside, to have jumped from one genre to another. He was a very difficult author for readers to get a fix on. Although one of his books, The Dragon Waiting (1983) won the World Fantasy Award (and has been reissued in the UK as a Fantasy Masterwork), it doesn’t feel like he’s yet a part of the canon in the same way as the other authors I’ve discussed here. For those who knew him – and I certainly can’t claim to have – he was clearly an enormously erudite and witty polymath. Those characteristics come through in his writing, as I discussed in a long review of his last collection, Heat of Fusion (2004) in The New York Review of Science Fiction (April 2006). In brief, it seemed to me that a lot of his short fiction (and poetry) was spurred by formal challenges. Can you write a sonnet that’s a palindrome? Can you write a present-day retelling of the Oedipus myth as a road movie? Can you write a story embodying and describing a Kuhnian paradigm shift in how humans see the world? Ford could, and did. Inevitably, given the range of challenges he set himself, the works in the collection weren’t all as effective as his considerable best. There was also a sense that some of them foregrounded the technical challenge they were overcoming, so that the figure of the story occasionally didn’t emerge from the background of its predecessor works. But the relationship with predecessor works was clearly the starting-point for much of Ford’s work.

A lot of his early career was spent working in other people’s universes. For instance, he produced surely the funniest RPG scenario ever, The Yellow Clearance Black Box Blues for Paranoia. A little closer to Locus’s remit are his two Star Trek tie-ins, The Final Reflection (1984) and How Much for Just the Planet? (1987). How Much for Just the Planet? might sound terrible if I paraphrased it as ‘‘The crew of the Enterprise encounter a book-long Wackiness Field.’’ The plot is, ostensibly, centred around a contest for dilithium crystals between the Federation and the Klingon Empire on the planet of Direidi. But Direidi organises its life around, well, the principles of the musical comedy. So viewpoints are articulated in pastiche songs, custard-pie fights are used to settle disputes, and an aura of sunny benignity presides over the whole. Most crucially, Ford
manages to juggle all these different registers without seeming saccharine or (too) silly. He certainly has the mannerisms of Kirk and his crew to a T, and even found a place in the plot for a full-scale inflatable replica of the USS Enterprise.

What’s clear from the book is that Ford had absorbed the Star Trek mythos, but wasn’t interested in doing a conventional take on that mythos. The word ‘‘mash-up’’ is so heavily overused these days, but that’s what Ford provides us with here: the genre in which Kirk and his shipmates existed colliding with another, entirely different one. Like Howard Waldrop – a very similar writer in a range of ways – Ford is fascinated by, as it were, the gravitational pull of certain cultural or historical artefacts and what would happen if you combined them. This is necessarily a fantastic gesture: even within the frame of Star Trek, the intrusion of musical numbers feels as invigoratingly unexpected as a trip to Oz. But Ford’s disinclination (like Waldrop, or any good magician) to repeat his effects may have contributed to his underestimation by readers.

The Dragon Waiting is subtitled ‘‘A Masque of History’’, and this is a useful way to understand it. It’s set in a 15th-century Europe altered from what history recorded – partly by some historical changes, and partly by the presence of fantastical elements such as magic and vampires. The presence and myth of Byzantium is one central idea behind the book; so is the myth of Richard III, as presented or traduced by Shakespeare. As often in his novels, Ford follows several young protagonists; protagonists who are able to visibly change and learn as the book progresses. So, for instance, in the first chapter, the Welsh boy Hywel learns about the cost of magic from a captured wizard:

I will not hurt you, novice, said the voice inside his head. Your strength will return. This is your first lesson.

Hywel turned back to Ptolemy, who sat back, head cocked to one side, eyes dark and very deep.

‘‘Time and energy,’’ Ptolemy said quietly, ‘‘never energy alone. Spirit is to matter at… I’ve forgotten the numbers; some astounding ratio. You cannot push down a stone wall with your hands… but if you will wait, find the keystone of the wall, the effort you can make will produce the result you want. So with magic. And the stones, falling, will crush something. So with magic.’’

If there’s a neater allusion to E=mc2 in fiction, I don’t know it; but the real point here – a persistent Ford theme – is that nothing comes for free. The use of magic costs (and hurts); so does the exercise of power, especially power over other people. The Dragon Waiting comprises thirteen long chapters, the first few of which introduce the main characters, subsequent ones bringing them together. There are plenty of historical jokes – including, I’m sure, plenty more that I wasn’t erudite enough to catch. As I suggested earlier, ideas of a masque – or, perhaps, of the theatrical – are helpful in understanding Ford’s approach. Each chapter is very visibly staged: the setting is outlined, characters are introduced methodically, epigraphs from Shakespeare frame everything. In the mind’s eye, one remembers the book as a series of tableaux, all existing within the proscenium of Ford’s historical knowledge and speculation. It’s probably the most plotted of Ford’s books, and also the one that makes most allowance for readers who may not be expecting the filigree intricacy of his stories. It can, and should, be followed right to the end.

Growing Up Weightless is a very different book, a coming-of-age story set on a human lunar colony. Of course, there are plenty of SFnal predecessors in describing this kind of setting – most famously, Heinlein’s The Moon is a Harsh Mistress. The worldbuilding is unobtrusively effective, and incorporates then-new ideas of virtual reality as an escape from the lunar world. I was especially impressed by Ford’s skill at one of the toughest tasks in the creation of any new SFnal world: creating a language for his imagined world that seems fully lived-in. Too often, SF writers come up with terms for new inventions that seem somehow superimposed, too clunky to be believed or used. In this world, terms like ‘‘frames’’ or ‘‘slates’’ have been adapted for uses that seem entirely plausible.

Once again, this is a book about power and its costs. The young protagonist Matt has an ambivalent relationship with his politician father – but one that we see from both sides. The VR adventures that he and his friends enjoy form a neat counterpoint to the main narrative – and again make clear Ford’s sense of stories as things that are staged, presented in a frame of prior stories. It’s very much to the book’s credit that it ducks some of the generic shortcuts of its own predecessors, that it offers no skyhooks out of the situation it describes.

The Last Hot Time was apparently completed some years before its publication. It’s a fantasy of Chicago – specifically, the myths of 20th-century Chicago crosshatched with Faerie. But that kind of experience can be made to stand for any young person’s arrival in a vast urban environment. For me, at least, Danny Holman’s odyssey through this gaudy metropolis was reminiscent of Fritz Leiber’s cityscapes, with magic potentially lurking inside the door of every strange bar or club. (Gene Wolfe’s Free Live Free (1984) is another possible ancestor, for similar reasons.) The telling of the story is dense and dialogue-driven; of all these books, it’s the one that requires the reader to do the most unpacking of its implications. It makes clearer than some other Ford books a particular burden imposed on his characters: they are required to recognise the story they’re in, and act accordingly. If, for instance, you’re given another name, you must understand the deepest sense of what that name signifies, of what it tells you about who you really are. Even trivial jokes or puns carry meaning: in this context, of course ‘‘Outsider’s Disease’’ is called ‘‘Loop Garous.’’

The Last Hot Time does contain the most poignant and adult relationship depicted in any of these novels, and it also reveals a fondness for Americana that’s not nearly so visible in Ford’s other works. (That’s not to say that his depictions of, say, Wales or Florence in The Dragon Waiting are inauthentic, but there is a sense of coming home in this book.) The experiment embodied in the book is whether Americana can coexist comfortably with the deeply European roots of the fairytales that Ford invokes.

A last Ford novel, Aspects, was left incomplete at his death. Whether or not it’s published, John M. Ford is one of the easiest writers for the critic to provide a recommendation on: start anywhere, and read. His work embodies the joy of a life spent wrestling with the texts and stories of the past, a joy that he wants his readers to share. 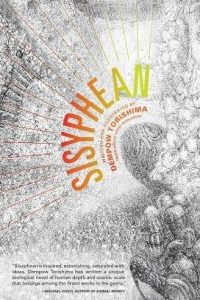