Briarpatch by Tim Pratt (a Locus senior editor) takes place in a modern Bay Area that’s weirdly porous: riddled by hidden passages into the many – infinite? – worlds collectively known as the Briarpatch. An epigraph from ‘‘Br’er Rabbit and the Tar Baby’’ (traditional) uses that word for somewhere Br’er says he really doesn’t want to go, deeming it worse than several gruesome forms of personal torture. That sense of pain and darkness extends into an opening chapter where one man’s run of foul luck reaches its horrific low point.

Though it’s woven into a brief flashback to an erotic conversation between Darrin and his girlfriend, the opening image in ‘‘Bridget Jumps’’ captures that final moment when he watches her ‘‘climb over the railing of the Golden Gate Bridge and dive headfirst into the water 200 feet below… [to] strike the surface of San Francisco Bay with a force of 15,000 pounds of pressure per square inch, dying instantly of the resulting physical trauma.’’ This clinical wording contrasts sharply with the image of her six months earlier, lying naked and idly chatting in a room where candles burn and light jazz plays on the bedside radio.

Among a growing cast of eccentrics and victims, Darrin is one of the least passive. His misery and confusion develop into a sense of outraged inquiry: Why did apparent chance bring him to the bridge just then, when he had no chance to save her? What if it wasn’t chance? While the book’s closest thing to a hero is searching for a villain, the kaleidoscope of perspectives shifts to reveal that villain as he sees himself. Touched by past tragedies (yet more chronicles of loss), Ismael Plenty pursues a dream that has already endured well beyond the normal bounds of the human life-span. From his perspective, ‘‘The world did change, was always changing, getting better in some respects – fewer fleas now, less slavery. The world just never got good enough.’’ Time hasn’t entirely jaded him: he’s driven by ideals. Even more than his special powers, that makes him dangerous.

Ismael’s centuries of survival on Earth, and continuing travels in the Briarpatch’s host of less likely places, suggest that if any world’s a hell, it’s this one, with its countless mortal sufferers. Through all the journeys, though, Ismael has only been able to obtain a few distant visions of what he conceives as a much finer place: a realm of ultimate blissful release which he’d do anything to reach. If he can ride there on the coattails of just the right kind of suicide, Ismael might finally end a prolonged existence where no amount of occult power compensates for his woes. Could Darrin, brought to ultimate desperation, be the one?

Introducing foul-mouthed, cynical modern humans into mind-bending alternate realms (some too peculiar to last for long), and then taking them back to the Bay Area, creates a fascinating background for their private quests. Some seek emotional relief, others metaphysical answers; one psycho, new to the Briarpatch, may just be out for her idea of fun. And then some major characters, aside from Ismael, prove not be entirely human….

Final section ‘‘Everybody Gets What’s Coming to Them’’ defies both genre and general morality with a sly zest that takes Briarpatch well beyond the darkness of the opening. It showcases Pratt’s ability to interweave the most fantastic places and concepts with scenes that any Bay Area resident might know. A late reference to the duck pond of Oakland’s Montclair village (just down the hill from Locus HQ) struck me with the emotional force of some Xanadu! 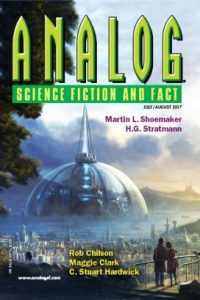