Not quite 20 years ago, Vernor Vinge produced an instant classic in A Fire Upon the Deep, a complicated mix of New Space Opera, cosmology opera, planetary romance, alien encounter, and intrigue adventure with a set of givens and a back-story that would take most of this column to outline, which means that reviewing its sequel, The Children of the Sky, increases the expository load to the breaking point. Come to think of it, those who have not read A Fire Upon the Deep should skip the top half of this column and invest the time in repairing that unfortunate condition. You’ll thank me.

For those who have fond but perhaps slightly fuzzy recollections of A Fire Upon the Deep, here is the nickel tour (also skippable, for those with fresher memories): The far-future galaxy that is the grand setting for these books is divided into layered Zones in which the basic laws of physics are variable, affecting everything from the possibility of faster-than-light travel to the complexity of the processes that govern automation or thought itself. The Unthinking Depths at the galactic core are exactly that, but in the surrounding Slow Zone, humankind and other species have evolved and developed relatively primitive technologies, up to and including sub-light spaceflight. Out in the Beyond, interstellar civilizations swarm, wielding magical technologies, and in the Transcend are the Powers – entities that might as well be gods. A Fire Upon the Deep is the story of human refugees from the Beyond, mostly children, who have been pursued into the Slow Zone by an ancient malign Power, the Blight. They wind up stranded on the medieval-level world of the doglike, composite-minded Tines, where they must survive local rivalries and wars while figuring out how to counter the Blight.

Most of the central characters of The Children of the Sky were featured in A Fire Upon the Deep. Among the humans, the principle protagonists are Ravna Bergsndot and the now-grown sibling Children Johanna and Jefri Olsndot. Among the Tines, Woodcarver, queen of a Domain sustained partly by human technology, her consort Pilgrim, and the escaped villain Vendacious all have prominent roles. New Tinish actors include a deliberately designed genius pack; a reconstituted and theoretically reformed rebuild of the sadistic Lord Steel; Screwfloss, who spends most of the story as a ‘‘remnant’’ after he loses one of his key members; and the inventor-entrepreneur-egomaniac called Tycoon, who has a very personal grudge against Johanna.

The main action begins ten years after the events of A Fire Upon the Deep, with the Children at various stages of young- and full-adulthood (some have started their own families) and Ravna anxiously preparing for the eventual arrival of the surviving elements of the Blight fleet, which wields enough technology even in the Slow Zone to destroy the entire Tinish solar system. But while Ravna’s attention has been focused on the Blight and various basic problems of survival, her charges have been developing a counter-culture of their own, and one of its features is skepticism about how they all came to be stranded on a primitive world: ‘‘The Children had gone from a world with families and friends, to waking up surrounded by Tines and a single human adult. All they had was [Ravna’s] word about what had made that happen.’’ The Deniers can’t believe that their parents had foolishly awakened a malign Power, and the most extreme go so far as to completely invert the roles in the story, turning the Blighter fleet into a rescue mission and Ravna into an incompetent or worse.

Another source of Denier sentiment, especially among the older Children, is having to do without the amenities and comforts they remember from life in the Beyond. They have difficulty adjusting to objects and materials so dumb that they need to be operated and might even malfunction. Then there is their itch to regain the longevity technology available in the Beyond, which means directing resources and effort to that rather than to preparing for the Blight.

But there’s more than spoiled-adolescent discontent at work, and again humans wind up divided into factions and drafted into Tinish rivalries and schemes. Tycoon has been stealing and adapting human technology to extend his business empire, and his ambitions are as large as his considerable ego. In this he has been aided by the sadistic arch-plotter Vendacious, who has his own agenda of revenge and domination. While Tycoon has been figuring out how to harness the abilities of the strange, tropical Tines called the Choir, Vendacious has been encouraging the worst of the Deniers to engineer a coup that will remove Ravna from her position of leader/surrogate parent and wielder of the considerable material and informational resources of the grounded starship.

What starts out looking like a purely human generation-gap crisis turns into a palace revolution, followed by betrayals, misdirections, abductions, murders, chases and escapes, involuntary tours of (and involuntary immersions in) previously unseen geographies and Tinish cultures, and revelations of unsuspected alliances and vendettas. The organizational chart for this complex of intrigues is quite a tangle. Tycoon relies on Vendacious for spying and the long-distance manipulation of the Denier faction, and Vendacious’s primary tool is one of the older Children, a budding politician and fully-formed sociopath who is almost as smart as he thinks he is. The usurper Child even has a hold on hot-headed Jefri, who is torn between Denier-ish skepticism and his bonds to his sister and Ravna. Meanwhile, over everything looms the threat of the Blight fleet, which might be centuries or (under the right circumstances) only hours away.

Much of the pleasure here is the old science-fictional one of watching the working-out of the implications and elaborations of the series’ exotic/inventive givens: How do Tines manage tasks such as tailoring and sewing, given their lack of hands and the operation of their composite minds? What kinds of Tinish mental structure are possible when the usual limits of the pack are exceeded? What kind of creature/person/entity might be emerging from the mob-mentality environment of the tropical Choir? How do Tine personalities maintain stability as old members die and new ones are introduced? (Woodcarver’s personality wobbles as she tries to integrate a new puppy, the interestingly named Sht.) Other pleasures are those of the peripatetic adventure: exploring strange new geographic and social landscapes on foot or via airship, devising an exotic variation on Br’er Rabbit’s briar-patch con, running away as a circus, starring in a petting zoo.

The Children of the Sky is narrower in scope and less multi-subgenre-busy than its predecessor, operating entirely in planetary romance/alien-psychology mode, with the cosmology/space operatics suspended, awaiting resolution in a later (presumably climactic) volume. But what it lacks in Stapledonian vastness it more than makes up for in its ingenious elaboration of the scope of Tinish psychology and mentality and its admirably complicated intrigue plot. It’s a slightly different kind of ride from the wilder, wider A Fire Upon the Deep, but the landscape it traverses has its own fascination and excitement.

The Children of the Sky 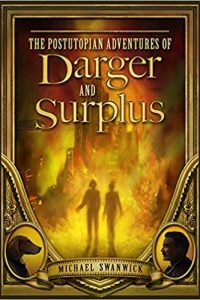