I inaugurated this column in 2008 with an editorial called ‘‘Why I Copyfight’’, which talked about the tricky balance between creativity, culture, and the relationship between audiences and creators. These have always been hard subjects, and the Internet has made them harder still, because the thing that triggers copyright rules – copying – is an intrinsic part of the functioning of the Internet and computers. There’s really no such thing as ‘‘loading’’ a web-page – you make a copy of it. There’s really no such thing as ‘‘reading’’ a file off a hard-drive – you copy it into memory.

The story of modern Internet regulation and copyright goes back (at least) to 1995 and Al Gore’s National Information Infrastructure hearings, where Bruce Lehman, Bill Clinton’s copyright czar, pushed for expansive new copyright rules for the net. These proposals were pretty bonkers, so Gore sent him packing, and he scurried off to Geneva, to the UN’s World Intellectual Property Organization, where he instigated the WIPO Copyright Treaty, which became US law in 1998, as the Digital Millennium Copyright Act.

We’ve been arguing about copyright and the Internet for at least 16 years now, and the arguments keep going back and forth over well-defined ground, wearing deep grooves in the discourse.

For example, take the matter of ‘‘intermediary liability,’’ the kind of abstract subject that was once the exclusive purview of genuine copyright nerds. In law, intermediary liability is the liability borne by service providers and other entities that transmit or host material that infringes copyright. One of the major questions that’s burned up the copyright debate for 16 years is whether ISPs, web-hosting companies and other ‘‘intermediaries’’ can be found liable for their users’ infringements, and if so, under what circumstances.

But this isn’t a copyright policy. Intermediaries carry plenty of material that has nothing to do with the copyright wars – political videos during election season, first-hand accounts of war crimes, private videos of kids playing in the bath, emails between doctors and patients (or attorneys and clients), and much more besides.

Viacom, in its billion-dollar copyright lawsuit against YouTube, asked the court to declare that intermediaries should be forced to disable privacy features on their services so that every hosted file could be examined by its copyright enforcement bots. If the Internet consisted of nothing but entertainment content, that might make sense, but entertainment’s the Internet’s sideshow, while the main event is everything else we do online.

Various record industry legal theories have asked courts to hold that universities and colleges should be held liable for students’ illegal music downloads unless they install network spyware that snoops on all the network’s communications to find the ‘‘bad stuff.’’ If campus networks were nothing but glorified TV and radio delivery systems this might make sense, but for universities, the main thing that the Internet enables is free intellectual inquiry, and the entertainment stuff is just a diversion between scholarly pursuits.

The disconnection laws that the entertainment industry has bought for itself in the UK, New Zealand and France provide for removing whole households from the Internet on the strength of their copyright accusations. If the net were just cable TV, this might make sense, but for families all over the world, the net is work, socialization, health, education, access to tools and ideas, freedom of speech, assembly and the press, as well as the conduit to political and civic engagement.

I’m all for sorting out the rules that govern the entertainment’s supply chain, but let’s keep some perspective here: when we ‘‘solve’’ copyright problems at the expense of the Internet, we solve them at the expense of 21st-century society as a whole.

When musician Don Henley writes in USA Today in support of the proposed PROTECT-IP Act, which will establish a national Internet censorship regime in the USA, ostensibly to fight copyright infringement, he says that free speech doesn’t enter into it, because ‘‘piracy’’ isn’t a form of free speech.

This is why it’s time to stop talking about copyright and creativity and start talking about the Internet. Because someone can be as smart and talented as Don Henley and still think that you can establish nationwide networked surveillance and censorship and all you’re going to touch on is ‘‘piracy.’’

For so long as we go on focusing this debate on artists, creativity, and audiences – instead of free speech, privacy, and fairness – we’ll keep making the future of society as a whole subservient to the present-day business woes of one industry.

From the November 2011 issue of Locus Magazine

Kameron Hurley: When Should You Compromise? How to Evaluate Editorial Feedback 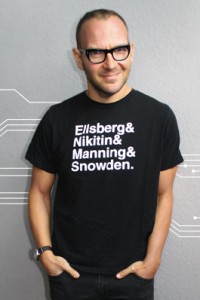