McCaffrey is best known for her long-running Pern series of SF novels and stories. She was the first woman to win both the Hugo and the Nebula Awards, with “Weyr Search” (1968) and “Dragonrider” (1969) respectively. Pern novel The White Dragon (1978) was the first hardcover SF novel to make the New York Times bestseller list. Many of the later books in the Pern series were written in collaboration with McCaffrey’s son Todd. In all she authored or co-wrote more than 100 titles, beginning with first novel Restoree (1967).

Anne Inez McCaffrey was born April 1, 1926 in Cambridge MA. She attended Radcliffe College, graduating in 1947, and worked as an advertising copywriter while directing and performing in stage productions. She married H. Wright Johnson in 1950, and had three children. She divorced Johnson in 1970, and moved to Ireland, where she opened a stable and began raising horses.

See the January issue of Locus for a complete obituary and appreciations. 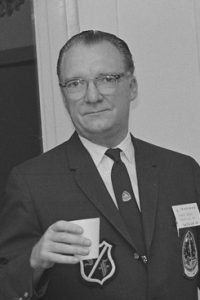