Daniel Polansky’s debut novel Low Town is hardboiled fantasy, taking the structure of a noir crime novel and setting it not in the mean streets of our world but in a fantasy universe. The closest analogue that comes to mind is Alex Bledsoe’s Eddie LaCrosse series, which transforms the wisecracking private investigator into a freelance ‘‘sword jockey’’ in a magical world. Polansky’s novel is darker, however, and centers on a different sort of archetypal detective: the disgraced ex-cop turned addict, making a living on the wrong side of the law, who gets reluctantly drawn into a mystery. (Think Ken Bruen’s Jack Taylor novels, or Lawrence Block’s alcoholic Matthew Scudder.)

Polansky’s narrator is known as ‘‘the Warden’’ by the denizens of the slum neighborhood called Low Town. The name is appropriate both because he used to be a member of the crown’s elite investigative staff (one part criminal investigators, two parts secret police), and because he ruthlessly controls his own slice of criminal territory. Since being kicked off the force for reasons that are hinted at but never made entirely clear, he’s made his living as a drug dealer (who samples a lot of his own product). He doesn’t have many friends, and he’s estranged from the nearest thing he has to family, the elderly wizard called the Blue Crane and the Crane’s adopted daughter, Celia, who still carries a torch for the Warden despite his degeneration into crime.

The Warden’s life is bleak but stable… until a child from Low Town disappears. Her body turns up, mutilated horribly enough to draw the attention of the agents. The Warden finds her body, and once it becomes clear the agents won’t make much progress with their inquiries, the Warden reluctantly begins his own investigation. One danger with a novel like this is that the fantasy elements will serve as mere window dressing, resulting in a book that could have worked just as well as a straight mystery, and for the first few chapters I worried that might be the case. But the fantasy element turns out to be nicely integral to the mystery. The Warden soon tracks down the killer, a thuggish member of a local immigrant communities, but before he can confront the man in an alleyway, a horrifying apparition appears, chastises the killer for ‘‘mistreating’’ the girl, and proceeds to gruesomely murder him.

The Warden recognizes the monster. He saw a similar creature during his service in the war against the Dren, when sorcerers on his side summoned monsters from the void to devastate the enemy – they’re basically magical weapons of mass destruction. The Warden knows a powerful sorcerer must be involved, but the agents are ready to write the whole thing off: an evil foreigner murdered a child and died himself under mysterious circumstances. Good result, case closed.

But then more children turn up dead, the Warden himself becomes a suspect, and to clear his name (and save his life), he has to find the real killer. In classic PI fashion he wanders around, picks fights, pokes his nose into the business of crime lords and noble lords alike, follows hunches that turn into leads, and gets beaten up a lot. The resolution is pretty well done, though the mystery could have used a bit more misdirection, and the Warden does a couple of dumb things that are only slightly excused by the fact that he’s on drugs much of the time. Still, the solution is basically satisfying, and ties back nicely into the Warden’s personal life.

Polansky doesn’t break any new ground here, but he deftly recombines fantasy and noir elements to create a pleasing cross-genre mystery, with enough unanswered questions left about the Warden’s past to make me hope this is the beginning of a series. In novels like these, narrative voice is paramount, and the Warden has a great voice. I hope to hear more from him. 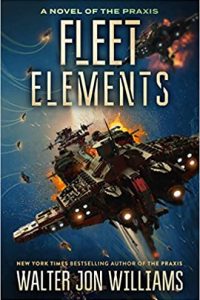