The 2011 Emperor Norton Awards winners are:

Both authors were on hand to receive their awards. The awards are given for “extraordinary invention and creativity unhindered by the constraints of paltry reason,” in memory of Joshua Norton I, the self-proclaimed Emperor of the United States of America and Protector of Mexico. 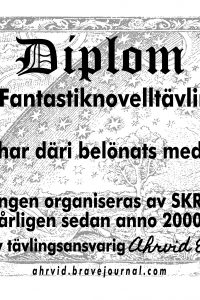