Aug-Sep 2011—
Issue 23, £3.95, 64pp
• This issue has stories by Simon Bestwick, K. Harding Stalter, Ramsey Campbell, Simon McCaffery, and Tim Lees.
• Columns are by Peter Tennant, Stephen Volk, Christopher Fowler, Mike O’Driscoll; reviews are by Tony Lee and Peter Tennant.
• The magazine’s website has this post with opening lines from each of the stories. 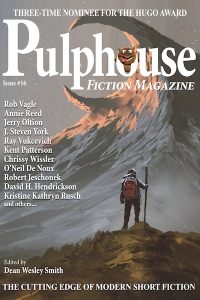 Travis John Klune was born May 20, 1982, in Roseburg OR, where he lived until his family relocated to Tucson AZ when he was 16. He moved to Virginia in 2013, where he worked in insurance before becoming a full-time writer in 2016. Klune began publishing with Bear, Otter and the Kid (2011), and has authored numerous queer romances. His first work of genre interest was Burn (2012). Lambda Award