Kris Saknussemm’s first novel Zanesville, (billed as ‘‘the first book in the Lodemania Testament series’’), was a kind of phantasmagoric Krazy Kat dystopia published by Villard in an apparent effort to position it in the balls-out postmodern fabulist tradition that stretches from Vonnegut and Barth to David Foster Wallace and Jonathan Safran Foer – or at the very least to set the table for a new cult author. Possibly as a result, the novel didn’t draw a great deal of attention in the SF world, although Faren Miller did review it in these pages in October 2005. His new novel Enigmatic Pilot comes to us from the Del Rey imprint (another division of Random House), which may or may not indicate an effort at repositioning, but it’s also interesting to note that none of the advance material I can find, either in the proof copy or on the Del Rey website, says anything at all about the Lodemania Testament series, despite this novel’s clear relationship to Zanesville. Though set in the near future, that novel introduced us to the ‘‘neglected nineteenth-century American genius’’ Lloyd Meadhorn Sitturd, a prodigal inventor of everything from flying machines to a radical amusement park and a utopian community, who disappeared in a tornado in 1913 after his community was attacked by vigilantes. Enigmatic Pilot takes us back to 1844, when Sitturd is the preternaturally brilliant five-year-old son of the blacksmith and failed inventor Hephaestus and his sea-island Creole wife Rapture, whose talents for healing and herbalism complement her husband’s mechanical skills. The young Lloyd, whose genius inherits bits of both worlds but far surpasses either parent – at times he sounds like Stewie from Family Guy – soon finds himself involved in a wildly picaresque adventure that involves not only the familiar icons of frontier Americana such as gamblers and sharpshooters, but also rival secret societies vying for control of the world and ominous inventors whose technology far outstrips anything known in the mid-19th century.

The tale opens in Zanesville, where Lloyd’s bizarre intelligence – he builds a fully operational mechanical beaver for a science fair – and odd mood swings make him an easy target for schoolyard bullies, while his parents’ mounting debt and deepening poverty threaten them with homelessness. When a letter and a small sum of money arrive from Hephaestus’s brother, inviting them to join him in his remote Texas settlement, it comes as both a chance for escape and the beginning of an arduous frontier journey – first to Cincinnati, where they live for a while above a butcher shop, then to Louisville, where Lloyd falls in with a talented gambler named St. Ives, who sports an astonishingly sophisticated mechanical hand (which later plays a role in the novel’s crypto-steampunk backstory). The family grows increasingly dependent on Lloyd’s ingenuity, and he later joins a riverboat showman, where his phenomenal memory and ingenuity in building devices like toy airplanes makes him a star attraction, along with two strange creatures called the Ambassadors from Mars – possibly just microcephalics, but with a curious unidentifiable written language which also comes to play a larger role. In St. Louis, though, Lloyd begins to learn of his possible role in a much larger tale, as a reclusive bookseller takes him through an elaborate series of secret passages to meet the ancient Mother Tongue, who reveals not only centuries of technology that have been hidden from history, but a historical schism between the followers of a legendary genius named Spiro of Lemnos and a splinter group called Vardogers, over the question of solving the Great Enigma. Both, needless to say, have secretly governed the course of human history, and Lloyd may well be the chosen one to help place history back on track.

That may look like a bit of a spoiler, but actually we’re barely a third of the way through the novel – and that the novel itself ends with an unexpected shift that telegraphs a great deal more to come. Lloyd experiences his first love affair, creates a disaster involving a hot-air balloon, gets involved with a weird religious sect called Quists and an Annie Oakley-style sharpshooter, discovers odd superpowers that come from amulets given him by Mother Tongue, comes up against androids that are part organic and part music box, and – mostly importantly – begins to draw the connections between all the apparently disparate adventures of his young life. All this is narrated in a tone that sometimes veers uneasily from philosophical speculation to dime-novel violence to pulp-conspiracy infodumps, with a bit of uncomfortably patronizing dialect meant to represent Rapture’s Gullah speech. But the predominant tone, suggested by the book’s subtitle, is that of the tall tale, with the improbable Lloyd – still a small child at the novel’s end – emerging as a kind of folkloristic legend in an overstuffed but very colorful alternate America. In the end, there’s really more of Phil Dick or Tim Powers here than of Barth and Vonnegut, and it may well be that the modern SF world is more attuned to the sort of contagious fun Saknussemm is having than are the aging precincts of postmodern fabulation.

Gary K. Wolfe Reviews We Are Satellites by Sarah Pinsker 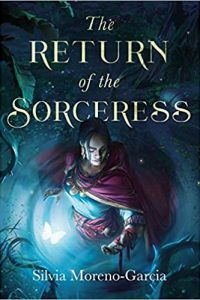 Gary K. Wolfe Reviews The Return of the Sorceress by Silvia Moreno-Garcia