The impressive critical reception that met Nnedi Okorafor’s first adult novel Who Fears Death last year, with its unflinching portrayals of weaponized rape and clitorectomy, shouldn’t have come as that much of a surprise to readers who had followed her first two YA novels Zahrah the Windseeker and The Shadow Speaker or her occasional short fiction like ‘‘On the Road’’; there’s always been an undercurrent of horror in her fiction even when it’s set in colorful green jungles. So it shouldn’t come as a surprise, either, that one of the major plot points of her third YA novel Akata Witch involves a brutal ritual child murderer named Black Hat, who mutilates his victims and terrorizes the Nigerian town to which the American-born narrator, Sunny Nwazue, has relocated with her Nigerian family. To be sure, Black Hat is kept offstage for most of the narrative, but his victims are real, and he serves as a reminder that the world can be unforgiving, even to kids with magical powers.

Not that Sunny needs many reminders. Born in New York to Igbo parents – a doctor and a lawyer – and having lived there until she was nine, she’s contemptuously regarded by her schoolmates as akata – a term used for African-Americans – and is further set apart by being an albino with yellow hair, as well as by being the smartest kid in her class. When the latter leads to a schoolyard gang-up, she is befriended by a boy named Orlu, who in turn introduces her to his friend Chichi, who lives in a book-filled mud hut with her mother (the father had abandoned them years earlier to become a famous musician). It’s not long before Orlu and Chichi, each of whom has particular ‘‘gifts’’ (Orlu can ‘‘undo things,’’ for example) sense a latent power in Sunny, and begin the process of initiating her into an ancient magical society of Leopard people, whose local headquarters is in a hidden village called Leopard Knocks. Sunny indeed turns out to be a ‘‘free agent’’ – an unaffiliated Leopard person – and as the novel begins to focus on her education through various levels of magic it begins to take on the aspect of a Nigerian version of the wizard school novel, at times even echoing Harry Potter (non-magical people are called Lambs; the village which provides magical supplies is itself reachable only by magic; Sunny finds herself with a small band of allies – including a kid from Chicago; the teachers are not all what they at first seem to be; secrets about Sunny’s family history get revealed). And that fearsome serial killer Black Hat comes to figure in all this as well, although the actual resolution of that part of the plot, suspenseful as it is, seems almost an afterthought following the detailed account of Sunny’s education.

That education, combining Okorafor’s trademark wild inventiveness with actual African folklore, seems to me both more substantial and less arbitrary than Harry Potter’s. Books as well as teachers play an important role in the novel, whose chapters are interspersed with quotations from a breezy guidebook Sunny buys called Fast Facts for Free Agents, and when Sunny first meets Chichi’s mother, she’s reading P. Amaury Talbot’s In the Shadow of the Bush, an actual 1912 memoir of African exploration (which also mentions a Juju called Leopard Knocks). When a lesson is learned, coins called chittims, the currency of the magical realm, materialize partly as a kind of reward, partly as an emblem of Sunny’s growing power. If Okorafor’s earlier novels were characterized by perilous quests through green jungles or postapocalyptic deserts, Akata Witch narrows its focus almost entirely to the town of Aba and its surroundings; the quest lies in what Sunny learns, and what she becomes. The neat part is, young readers engrossed in the suspenseful surface of the narrative likely won’t see this coming – or what the importance of books and learning is to the novel – until it falls into their laps like chittims at the end of the tale. 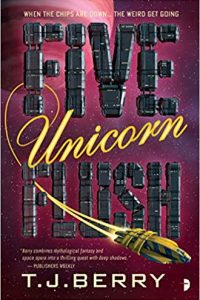