In the PR material for Anthony Huso’s The Last Page, David Drake calls it ‘‘an excellent story told in the High Style,’’ then cites Wolfe, Vance, and Eddison. At 400-plus pages, with maps, sometimes-ornate language, and an apparently familiar plot (raw new king, persecuted-witch girlfriend, a secret text, and a looming war – complete with airships), this first novel might sound like just another hopeful debut. But the writers Drake mentions are imaginative tricksters, rather than classic fantasists, and one further likely influence changes the tone still more.

In what could be a twisted tribute to Mervyn Peake’s Gormenghast novels, a thoroughly nasty palace spymaster bears the name Mr. Vhortghast. Here’s some of the scene where he meets the young king:

He moved with profound grace and was dressed no doubt for the occasion, sporting a luxuriant herringbone suit of dark material. His face moved like malformed clay… a visage that could easily have been hacked from a block of lard.

Worst of all are his teeth, with their weird metal workings – his grin ‘‘a sight capable of cracking glass.’’ His first words add to the effect: ‘‘I’m fairly insidious.’’

Huso plays this to the hilt, mingling the grotesque and the multisyllabic with amusement and considerable aplomb. The capital city of Isca has sewer systems, wrought iron balconies, and newspapers, among other post-medieval aspects, and our hero – who has been away from royal pomp for years – views his new role with some irony. Before a scheduled address to a military assembly, he has to sit through ‘‘some political drivel and overwrought metaphor,’’ in order to get his first view of ‘‘something fierce and slender and huge’’: a zeppelin.

Readers who hate anything that smacks of steampunk yet love Mervyn Peake can take comfort from the lack of ‘‘gosh-wow, look at our crazy tech!’’ attitudes throughout the book. What’s crazier are some of the names. I’ve been putting off revealing what he calls the new king; well, here it is: Calif Howl (with Calif just a first name, not a mark of station). Maybe that last name pays tribute to Howl’s Moving Castle by Diana Wynne Jones, or (more indirectly) Peake’s hero Titus Groan, but it does take some getting used to. Others range from the exotic – ‘‘Cisryn Ta’’, the sinister old text – to people and places that could fit right into Dickens’ London or Thomas Hardy’s countryside.

The Last Page may not have the astonishing impact of Titus Groan and the rest of the Gormenghast trilogy, but it’s a highly promising entry into today’s sometimes overspecialized field(s) of fantasy writing. I’m eager to see what Anthony Huso does next, whether or not it’s a direct sequel. 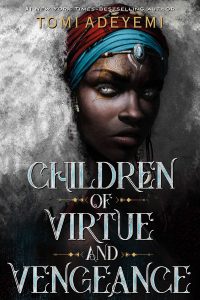