John Barnes’s new novel could have been titled Everything Falls Apart since the large-scale action concerns what happens to civilization when a handful of foundational technologies get taken away, but instead it’s called Directive 51, in honor of the document (which actually exists) that details how the US government will maintain itself in the face of possible catastrophic failure of social and material systems. Also concealed in that naming is a hard-SF-style treatment of some notions that in other hands might have been just literalized metaphors, but that here become frighteningly concrete.

Of course, a Directive (a set of rules and procedures) is one thing, and how it runs on the mental processors of various characters is another. And, to get to one of the book’s central concerns, that depends partly on their (idiosyncratic or shared) embedded semantic systems. Despite the importance of various speculative technological advances (primarily nano- and biotech), the crucial Ideas behind the action and the thematics of the novel have to do with systems of ideas and how they operate in a human population. That is, this is a story about semiotics, which hasn’t had this much attention since A.E. van Vogt got bitten by the Korzybski bug, married General Semantics to metaphysics, and gave us the wonderful looniness of Null-A. Barnes, however, is no looney – but we will return to this.

The book has two through-lines, the first of which generates and conditions the second. The first details the kind of comprehensive and discomforting disaster that Barnes has proven so good at constructing. ‘‘Daybreak’’ is a program of infrastructure sabotage designed to knock the world of 2024 down to some more basic level. What makes Daybreak strange and interesting is that it is not a traditional conspiracy but a distributed and apparently headless movement whose participants have widely differing ideologies and goals: ‘‘sort of like the formation of an international terrorist movement, sort of like an artists’ movement, sort of like a college fad, and sort of like a shared-world online game.’’

This makes for an interesting contrast with the competing ideologies of the Meme Wars cycle (Kaleidoscope Century, 1995; Candle, 2000; The Sky So Big and Black, 2002), which are actual entities (if, at the same time, literalized metaphors) – invasive artificial intelligences capable of subverting organic nervous systems. Daybreak, on the other hand, is a loose set of resentments coupled with an action plan (implemented via ‘‘action groups’’ or AGs), an expression of vast discontent running on individual nervous systems, each of which sees itself as freely participating in a movement that will take it where it wants to go.

It started as a huge, inchoate list of reasons people didn’t like the modern world. As people talked to each other, Daybreak lost all the reasons and justifications… and converged on a basic idea: Working together, we can take down civilization, and we should.

Barnes has been running variations on this family of ideas for a long time, and as scary as the autonomous, totalitarian memes and their psychotic minions in Kaleidoscope Century are, this kind of distributed pathology is even scarier because one can see something like it operating in public discourse right now. On the way to understanding the ‘‘how’’ of Daybreak, we get the hard-SF-style chalk-talks on how it was detected using statistical semiotics, including explanations of signprints, system artifacts, idea pumps, and other denizens of the noosphere. Infodumps, yes, but exceedingly well made and witty. (And, unlike the mathematical esoterica in, say, a Greg Egan story, bordering on an area with which I have a nodding acquaintance.)

The book opens with a terrorist takeover of the US Vice Presidential aircraft and the independent activities of various Daybreakers as they carefully plant devices that will eat plastics, decay petroleum products, and disable electronic and electrical gear. There is something of the technothriller here, with cinematic cross-cutting between the Vice President’s plane and the Daybreaker teams and their victims/vectors (truckers, plastic recyclers, electronics retailers) as they plant nano/biotech agents that will spread like infections across North America. The process is already under way when the newly formed Department of the Future (charged with imagining the unimaginable and then preparing for it) decides to take their fears about the Daybreak (whose activities they have been monitoring) upstairs. This is the second through-line: When the bad stuff starts to happen, the DoF is at the center of efforts to understand and counteract Daybreak, and then to keep the government functioning (via Directive 51), and finally to pick up the pieces of a comprehensively broken technological civilization.

If there is a main protagonist in the very large cast, it is Heather O’Grainne, a DoF Assistant Secretary with a law-enforcement background (a useful competence in the gun-toting days to come), but there are plenty of other interesting characters: Heather’s colleague and soon-to-be lover, NSA (No Such Agency/National Security Agency) cryptographer Lenny Plekhanov, whose frail body is full of Daybreak-threatened life-support machinery; DoF Secretary Graham Weisbrod, a charismatic futurist and old-professor/mentor to the current President and practically everybody at DoF; bolshy journalist Chris Mankiewicz, who will recapitulate the history of his craft backwards and make a bit of history on his own; fundamentalist Presidential candidate Will Norcross, who surprises everyone; Cameron Nguyen-Peters, who as the National Constitutional Continuity Coordinator has the unenviable job of implementing Directive 51 and keeping the United States alive. We also get to meet Daybreakers of various stripes: an odd couple of deep-Green neo-hippie and deep-end Christian; a well-matched pair of rich airheads who are looking forward to the days when people will be glad to work as servants; daughter-of-do-gooders Ysabel Roth, who gives us a different look at what it’s like to live inside and then emerge from the Daybreak cocoon.

The Daybreak breakdown is not complete: away from the death-traps of cities and suburban sprawl, people pull themselves together, resurrect Daybreak-proof technologies and skills, and (most important) resist the urge to devolve into tooth-and-claw social chaos. Not that this catastrophe is the least bit cozy – every time you think, ‘‘well, they’ve gotten through the worst part and are showing a bit of sense,’’ another shoe drops (Daybreak has some centipede genes) or some irrational scheme gets hatched or some toxic idea takes hold of someone with the means to undo all the good work. A successor Federal government (partly DoF-generated) works to preserve whatever social organization and physical infrastructure has survived the initial meltdown, but much of the drama of the last half of the book puts these efforts in danger as the tensions escalate between competing national-unity efforts rooted in contrasting notions about whether Daybreak was an act of war or an unrepeatable event.

The book’s observations of and about participation in idea-systems had my head lighting up like crazy – it’s hard not to think of the public-political idea-space over the last few years in the light of ‘‘idea pumps’’ and ‘‘system artifacts’’ and other notions from statistical semiotics. Back when I first learned my smattering of computer science, there was code and there was data and never the twain could meet. You couldn’t run data. But in the world according to John Barnes, even data is dangerous, because the human mind is not limited to running code – we are semantic processors and, worse yet, networked.

Although my review copy does not mention it, I see elsewhere that this is the first book of a trilogy, which might explain why various interesting characters are introduced but do not reappear as the story works out, and it certainly accounts for a couple of unresolved questions of who did what and why. This volume does not end in a cliffhanger, but those loose-end features suggest some interesting possible developments. But even without a sequel, Directive 51 is one of the most absorbing books I’ve read this year. 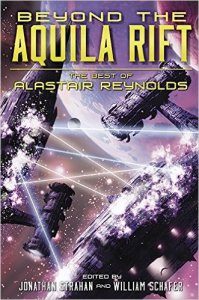