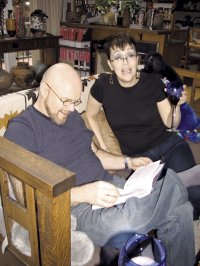 Deborah Beale was born near Birmingham England. She attended Manchester University, graduating in 1981 with an honors degree in English and American Literature. She spent 15 years working in London publishing, much of it devoted to SF and fantasy, including time at Pan Books, running the Legend imprint at Century Hutchinson, and later co-founding the Orion Publishing Group and the Millennium imprint.

With her husband Tad Williams, she is writing the “Ordinary Farm” YA fantasy series, with first book The Dragons of Ordinary Farm released in June 2009, and A Witch at Ordinary Farm and several others forthcoming.

She married Williams in 1994. They have two children and live in the San Francisco Bay Area.

“I was brought up with a notion that was battered into me that anything to do with ideas or creativity or the imagination was inconsequential; not only inconsequential but massively suspect, and the ‘upstanding nail’ (as the Dutch say) had to be hammered down. I had young parents, and they were lost: couldn’t make sense of their own lives. And it was a very 1950s childhood — Birmingham was in the ’50s until about 1977 — very conformist, very right-wing. It killed me from the start. There was a dark side to things whereby I just went down a long, long tunnel, and it was hard. I had to learn to fight off the family depression and that was extremely painful and time-consuming. There are some things that have taken me a long time to sort out.

“I am a product of the socialist education programs of England in the 1960s. The socialization of fine education happened, and it gave kids like me — lower-middle-class, never on the edge, but we were always on the edge existentially in my family — a chance to escape an oppressive home town, which I duly did. I passed the Eleven Plus, which was the big class barrier when one was 11 years old and of my generation. You passed the Eleven Plus and you went to the grammar school, and the grammar school gave you a classical education. It was phenomenal: pure sciences, pure arts, Greek, Latin, the world of ideas. It was absolutely brilliant. And it saved my soul.”

“When I got into publishing, I had a brief period (thankfully) when I wanted to work with literary fiction. I read for Sonny Mehta when was the head of Pan, and when he was acquiring for the Picador list, and I quickly learned that not very good literary fiction is just really bad fiction, and that by contrast, I was really interested in stuff like young adult fiction and popular fiction. I was the lowliest of a number of editors working on So Long, and Thanks For All The Fish, and that was a trip. It was actually the first Douglas Adams I’d read, and I literally fell out of my seat laughing, and then all these anxious sales people, plus Sonny, came to cross-examine me about how funny was it really, and was it truly going to work.”

“That old childhood haunt was back, wanting to write and not having a clue how to do it — that old secret self that hadn’t found anything to hook onto. From the start, I didn’t want to be a writer; I wanted to write, and there’s a crucial difference. When you start out writing, you dream, ‘I can have this life, and I won’t have to work in an office, and it will solve my life problems.’ Well, that’s the actual antithesis of what happens. What you have to do first and foremost is write. And continuing to do it will shape everything in your life. You have to put it at the center. You have to follow it. While I was publishing, I put writing aside. I couldn’t figure out a way with it. But I started again as soon as I had a little bit of success in publishing.

“When I write, I’m in touch with the mystery. In a New Yorker piece about writing that I quote in my blog, Ian McEwan describes it as slipping into a timeless zone. All of it — writing, science fiction, fantasy, contemporary physics, child rearing, the experience of life over a large arc of history, or a series of arcs of personal history — all of it comes back to this mystery, and I think about it every day in one form or another. Sometimes it’s a bit like it is thinking me.

“Another aspect of the mystery for me is the question of identity. There’s mystery external and there’s mystery internal. Of course they’re the same, but it takes you a lifetime to discover that. And that’s like the interaction of character and plot. Character has to evolve out of plot, but plot has to evolve out of character, and resolving the two of them is an external/internal process. When I’m actually doing it day by day, and I’m working in things that not only just sort of come up from my mind but that I source from my everyday — from my conversations with Tad, and from my own reading — then it becomes this living thing that’s really beyond me. That’s what we’re writing for: it’s the connection with the mystery. And it’s the arc of life.” 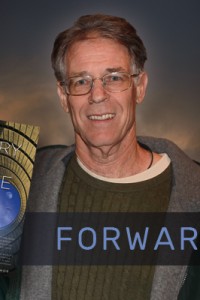