Roger Zelazny was one of the brilliant stars to emerge into the science fiction universe in the mid-1960s. He was a prolific and versatile writer who spanned the science fiction and fantasy fields as well as writing poetry and devising computer games. His earliest works, emotionally powerful, dreamily imagistic and often experimental, received great critical acclaim including multiple Hugo and Nebula Awards. Later in his life he tended toward less challenging but nonetheless entertaining and hugely popular adventure fantasies.

A soft-spoken, gentle-natured person, he was also seriously addicted to nicotine. It is hard to remember Roger without a cigarette in his mouth. This addiction surely contributed to, if it did not actually cause, his death at age 58 from cancer.

The impending publication of The Dead Man’s Brother early in 2009 came as a happy surprise to Roger’s myriad admirers. Allegedly written in 1970 or ’71, this novel was discovered by Roger’s agent, Kirby McCauley. Why it took nearly 40 years for the manuscript to emerge is itself a mystery.

The Dead Man’s Brother is dramatically different from any other Zelazny work. The book starts in the fashion of a classic hardboiled mystery. The protagonist, Ovid Wiley, proprietor of a Manhattan art gallery, arrives one morning to find a corpse awaiting him. We learn that Wiley is a reformed art thief. The body is that of his quondam partner in crime, Carl Bernini.

Wiley, now a solid citizen, calls the police, who take him into custody. Before long he realizes that he is going to be prosecuted for Bernini’s murder, but before things can progress very far he is “rescued” by CIA operatives who recruit him as an agent. He winds up in Rome, trying to track down $3,000,000 of stolen Vatican funds.

Things get incredibly tangled as Wiley becomes involved with a beautiful, hot-blooded Italian woman, travels briefly to Portugal, and thence to Brazil. Here he is once more entangled in a murder investigation. He winds up trekking through the Matto Grosso, dealing with a regional separatist movement, captured, tortured, escaping, dodging bullets, and – did I mention this before – smoking?

Roger was addicted to cigarettes. Oh, I said that already. Yes. So, obviously, is Ovid Wiley, whom I take to be a kind of fantasy alter-ego for the author. Wiley smokes before, during, and after virtually every scene in the book. He smokes when he wakes up in the morning. He smokes with his meals. He smokes while he waits for things to happen. He smokes whenever the author wants to pause the action. In the music world I believe the term for this is, vamp till ready.

After a while it becomes a kind of contest between reader and author, to see how long Roger – er, Ovid – can go without lighting a cigarette. He seldom goes longer than page without a ciggie, sometimes several on one page, and when Ovid isn’t smoking he’s being offered a smoke, offering a smoke, lighting a smoke for someone else, or watching somebody else smoke.

I had to take a shampoo to get the stink out of my hair when I finished reading this book.

My recommendation: Read Lord of Light. If you’ve already read it, read it again. It’s a masterpiece. Even if Roger couldn’t help having Buddha smoke a cigarette.

Editor’s note: This review, from the May 2009 issue, generated several letters of comment, which are reproduced as the first four comments below. 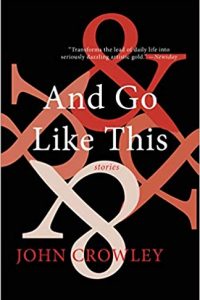 Gary K. Wolfe Reviews And Go Like This by John Crowley