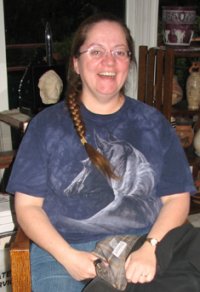 Patricia Briggs was born in Butte, Montana, and graduated Montana State University with degrees in history and German.

She switched from more traditional fantasy to urban fantasy with the popular Mercedes Thompson series about a were-coyote mechanic in a world of werewolves and vampires: Moon Called (2006), Blood Bound (2007), Iron Kissed (2008), and Bone Crossed (2009), with Silver Borne (2010) forthcoming. Her spin-off Alpha and Omega series started with Cry Wolf (2008) and continued with Hunting Ground (2009). She also wrote graphic novel Mercy Thompson: Homecoming (2009).

“After I got out of college and married, we moved to Chicago. More people worked at the Hancock Building in Chicago than lived in the biggest city in Montana at the time. It was odd to me that there were so many people in the world! You could drive for hours and not see anything but more city, so I retreated into books. In Montana, you think of the world as being this broad open place with just a few people. That’s why I write fantasy, because I like to think of the world like that. It scares me when I start thinking about how many people there really are.”

“Progress in women’s rights make us forget that historically women have been very powerful; they just haven’t been powerful in the way men are. The old medieval abbesses were incredibly powerful! Roman women weren’t empowered the way men were, but they had a lot of power too. We work differently. In a lot of Native American tribes, women ran the tribe. And in fact, if you want to go to the most masculine society of all, the Spartans, the men went out and fought and the women ran the world!

“I’m a big romance reader — I love romances. But my books are not romances. A romance novel turns on the relationship between a man and a woman; that’s the most important thing in the book. I think love is a wonderful motivator, because it makes us do really stupid things, things we would never do for any other reason. And it’s something we all need. So I use romance, but I don’t turn my plots on it. You could take the romance out of any of my books and still have a book, with a plot and characters and things, but if you took magic out the book would fall apart. That’s the big difference between the paranormal romance and urban fantasy.”

“Odd as it sounds, realism is the heart of urban fantasy. Your world has to feel real. You have to get the names of the places right, and you have to get the feel of it right, so if you stick a werewolf in people won’t go ‘Oh, that’s one thing too many, I can’t believe that, that’s stupid.’ I’m speaking of modern urban fantasy, but I think that’s true of the urban fantasy of Tim Powers and Charles de Lint, too. Making sure people know this is the real world is very important.”

“Urban fantasy lends itself to series with one major character where paranormal romance doesn’t, actually. In paranormal romance series, we usually jump from one pair of characters in one book, to another pair in the next. (If there’s gradual world-building, it evolves into urban fantasy whether the author wants it or not.) Urban fantasy series tend to be template series, where the characters don’t do a lot of evolving. That isn’t necessarily bad. Look at Louis L’Amour, who made a career out of writing the same book over and over again! I love every one of his books and I have favorites, and I look at them and know they’re predictable, but they’re awesome and wonderful because he’s a great storyteller. If you’re a good storyteller, you can get away with anything. We have a lot of great storytellers in urban fantasy.

“At the same time, that would bore me to tears as a writer. I try to challenge myself with each book, try to do something different so I’m not bored and I don’t get into a rut. To keep me interested, characters have to work through their problems, get new problems, work through those, and every time they change. You should still be able to recognize the core of who the person was at the beginning, but all these things you learn, and all these things they do, need to change them.” 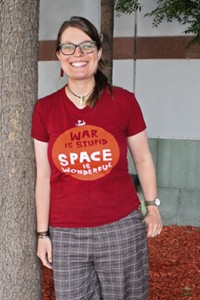 Becky Chambers: To Be Spaceborn 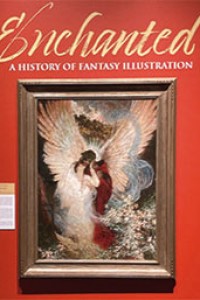