I write messy, incoherent first drafts. It sucks. But most of the time I’m okay with it. It’s my process, and it’s why revision exists.

Drafts aren’t what readers see. After getting that first blush of the book on paper, I spend each subsequent iteration fleshing out worldbuilding details and refining dialogue and fixing structure. Few people want to read about a bunch of characters expositing about the plot over tea, but that’s what a lot of my first drafts are… my characters explaining the plot to me.

How do I know a draft is ready for prime time? When there’s a deadline, usually. Or when I’ve done all I’m capable of doing at my current skill level and my agent says it’s fine. But usually… yeah, deadline. I’m ruled by deadlines. I have to toss my book out into the world eventually, or I’ll just sit around overthinking it, over-polishing it, and destroying everything great about it.

While there are plenty of writers who send out their work to editors too early, there’s another group that sends it out long after they have worn away the edges and creases that make it a stand-out piece of work. Spend too long polishing a piece of prose, and it will become all but invisible. Don’t spend enough time, and it will be so amateurish no one will take your seriously. Finding that balance is tough, but crucial to building a career.

One of the reasons I abide by crushing deadlines is because they give me a hard stop for how long I have to revise any one work. Every work can be improved by time. But how many books do you want to get written before you die? One? Great! Feel free to take 30 years on it.

I have a nice big long line of books I’d like to finish. In order to get those done, I need to get them out the door at a fairly grueling pace. I have three book releases in 2019. To achieve that, I had to let go of work again and again. I set myself personal deadlines, and work hard to abide by my contractual deadlines (my agent is laughing right now. Listen, I said “try”).

I have known people who workshop stories to death, long past the point at which workshopping is useful. Over-workshopping often reads to me like a form of procrastination, as if there will someday be a magical moment when you tweak a word here or there that transforms the story into a magical and angelic unicorn. You are never going to write a perfect story that makes everyone happy and is guaranteed to make a million dollars.

That’s not how this works, alas. What makes for salable stories is a complex mess of factors, but in general, editors want to buy books that they want to talk about, to discuss, to argue over, to love, and to deliver to an excited audience. In work that lasts, there’s no middle ground. Someone has to love it.

Take a look at some of those Goodreads ratings. Books with lots of positive or lots of positive and negative reviews tend to sell pretty well. It’s the ones that get the consistent two-stars, the “Eh, it was okay I guess,” response that aren’t going to move the needle. The best way to get a response like that is to polish something to such a fine sheen that it could be written by anybody.

As a reader, you know this, but writers sometimes forget it. We also forget that it’s not always our job to make people happy. It’s not our job to be perfect. It’s our job to tell great stories, and to tell a great story, you have to know when to let it go. When you have to learn and move on.

My second week at the Clarion West Writer’s Workshop, I wrote a story that upset people. It was violent and mean. Folks told me so. In week six, when we were asked to revise a story, that’s the one I revised. I was so stricken at being called unimaginative and offensive that I sanded down all of the story’s rough edges. I gutted its heart and put it back on the table. I made a story that would not be visceral or controversial to anyone, and in the process, I killed what made the story great. I hadn’t honed its sharp edges – I’d cut them off.

When the group saw the new story, they were in shock. “You took a great story that upset some people, and made it a mediocre story that would upset no one,” one of my classmates told me, and it was true. Anyone could have written that piece. The one before it? That was all me.

There’s a cliché about workshop stories in editing circles. If you aren’t careful, workshops can transform a bunch of unique authors with interesting voices into boring, mediocre writers who write perfectly fine but forgettable stories. This workshop mentality can kill your voice and originality, because you stop writing for yourself and start writing to be “liked” by a particular group of people.

That workshop was a good lesson in the danger of over-workshopping a story, for me. If you listen to all of the other voices and forget your own, or sand down rough edges instead of honing them into gutting blades, you’ll write a book that’s just like everyone else’s. Sure, maybe it will sell. But it will be the sort of book that anyone else can write. It will be unremarkable.

I also work hard at not overthinking my own writing and its reception. Certainly, I try to be aware of clichés and stereotypes. I do my homework. I listen to my readers, my editor, my agent. But the longer I have to overthink what I’ve written, the more likely I am to toss the whole thing. That’s not always the best course of action. It can feel like the best, because it’s the easiest. How is it easy? Because it means delaying putting yourself out there for another month, another year, another decade.

Don’t overpolish it. Don’t overthink it.

I am not only in the business of storytelling. I am in the business of telling Kameron Hurley stories, and those are tales that only I can tell. I want someone to be able to pick up a piece of fiction and know immediately that it’s mine. Many editors call this developing one’s voice, and it’s something that one can spend their entire career doing. Story after story, book after book, I’ve slowly started to refine what that voice is, and it’s uniquely mine.

Getting there has meant writing quickly, furiously, fervently, and often. It has meant hitting deadlines when necessary, and pushing them as necessary. It means thinking about everything I’m doing, and why, but not overthinking it. Not overpolishing it – and figuring out where that line is, for each of us, is a struggle in itself.

Writing is a constant journey, a push and pull between business concerns and creative vision. Finding that balance is difficult for each of us, but when you do achieve it – the payoff is developing a body of work that nobody else can duplicate. 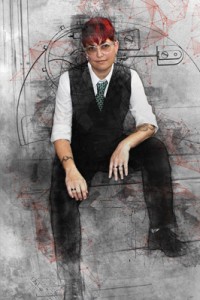