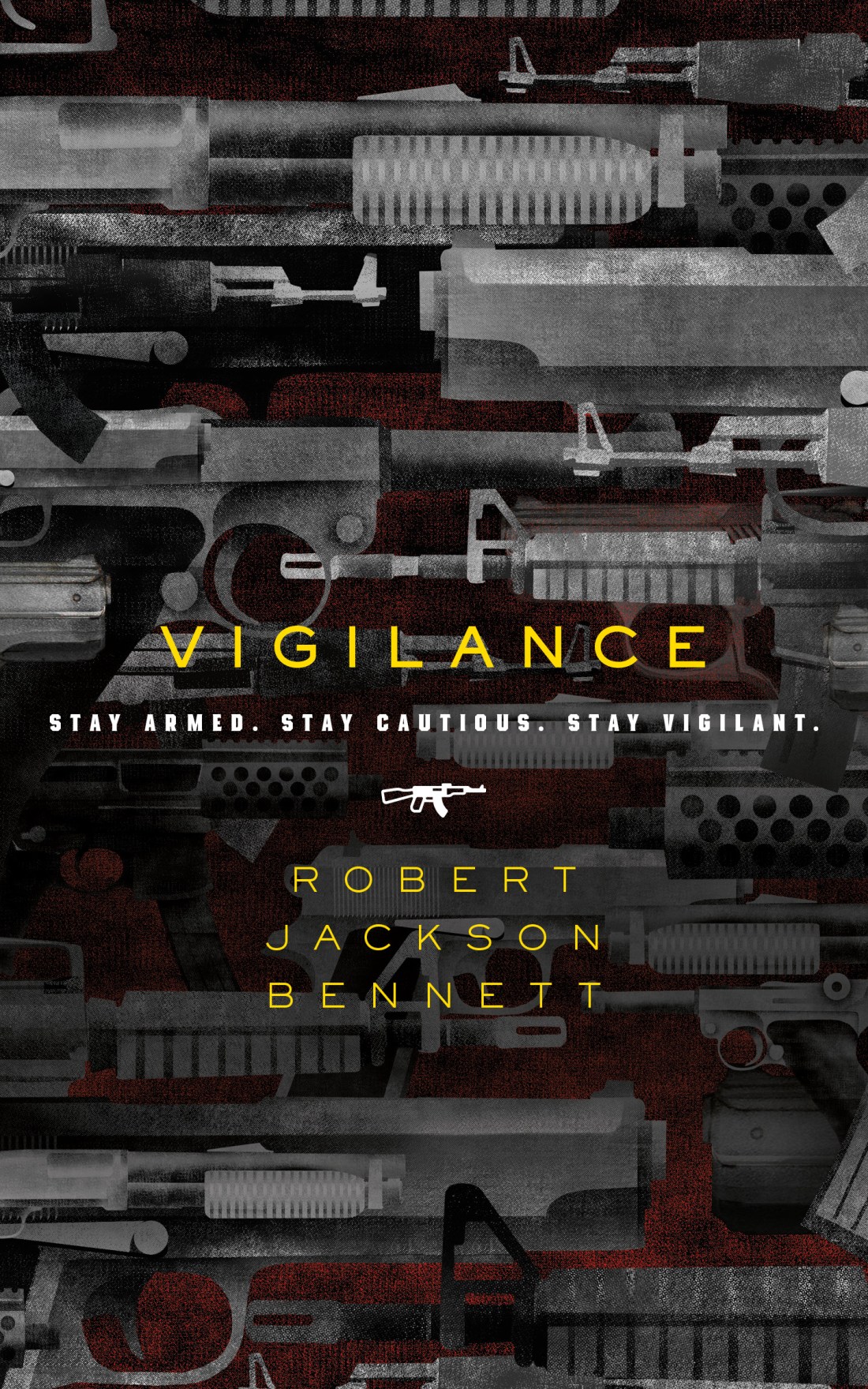 People keep telling me I should read Robert Jackson Bennett’s work, and I keep meaning to. But his 196-page-long novella from Tor.com Publishing, is the first of his work I’ve actually managed to read so far, and, on the evidence, Bennett can pack a hell of a punch.

Vigilance is less a story than an intensely distilled mood, an atmosphere wrought out of the US’s worst instincts and dystopian obsessions, like Stephen King’s The Running Man, but with its gamified violence updated for the 21st century and made totalising, all-consuming, and entirely manipulated to deliver sales from advertising. Forget The Hunger Games: Vigilance doesn’t think half so small.

It’s 2030, and there’s a new reality television game show in town. It’s called Vigilance and it exists to make money, but it does so by selling fear, by making sure American citizens stay vigilant for foreign and domestic threats. It does this by recruiting disaffected young men who want to commit a mass shooting, arming them (they get 1,000 ‘‘equipment points’’ to spend on a variety of destructive weaponry) and setting them loose on a ‘‘game environment.’’ The game environment is a public location somewhere in the United States, filled with civilians who are obliged to opt-in to participating in Vigilance in order to go about their daily lives. A shooter who survives as the last person standing will get a cash prize. A civilian or law enforcement professional who kills a shooter will also get a cash prize, but Vigilance has made it so that they hardly ever have to pay out to anyone. A new episode of Vigilance is about to kick off, and the stakes are as high as ever.

We see the world of Vigilance through the eyes of John McDean, Vigilance-the-show’s executive producer, who’s all about the advertising – a smart asshole who’s nonetheless sleazy as fuck and yet, strangely, vaguely sympathetic. Even his job could soon be automated into irrelevance, and he’s even more invested in it as a result. McDean’s point of view occupies most of Vigilance’s space, but he shares time with Delyna, a young black woman who’s a bartender at a bar where the clientele are avid Vigilance-watchers. She can’t stand Vigilance, or what it says about the United States, but she hasn’t emigrated because she believed the United States would get better. We learn that her father was a police officer who was himself shot to death by another officer who saw a black man with a gun and responded as many armed white Americans do – Delyna has no reason to believe in the prospect of US improvement, and yet, still she’s hoped for it.

Both McDean and Delyna observe, in their own ways, that the US is in a terminal decline, eating its own young and invested in a cycle of victim-blaming and totalising-violence-as-entertainment. This is where Vigilance-the-novella lives, engaged in the project of extrapolating and analysing the worst impulses in American political and social life – the racism, the nationalism, the American exceptionalism, the toxic masculinity and misogyny, the entitlement and the most destructive impulses of capitalism – and turning them into an entertaining and horrifying piece of near-future science fiction. Bennett’s prose is crisp, his style as much action-thriller as meditation on the failures of American humanity. He is structurally clever, too: the violence of Vigilance-the-show plays out in miniature in the confines of Delyna’s workplace, when she dares to turn off the television showing Vigilance-the-show and finds herself confronted by a set of angry, armed, thwarted, entitled white people. The personal and the political coincide. 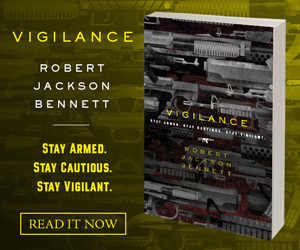 The conclusion reaches outside the US’s most self-destructive impulses for that external threat – the obsession with which Bennett has just spent a novella skewering. The Chinese, it seems, have infiltrated Vigilance-the-show to bring it down – and not incidentally, to complete the destruction of the US that the US had itself begun, using the tools that Vigilance-the-show is currently trying out to boost its advertising engagement. McDean gibbering in a ditch is a pleasant image (all one can really think is well-deserved!), but the thematic volte-face is jarring, and turns the focus away from the US’s sadistic, masochistic, self-immolating slow suicide to an outside power’s decision to help it along with a mercy-killing. At the end, I’m not quite sure what to make of it.

Grim, self-assured, and elegantly written, Vigilance is a very interesting work of art, deeply invested in the contemporary American moment. On an emotional level, it leaves me cold – but it works so hard to generate horrified revulsion from its matter-of-fact cynicism that I suspect it may well intend to leave its readers filled cold queasiness.