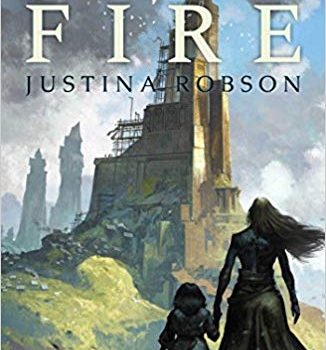 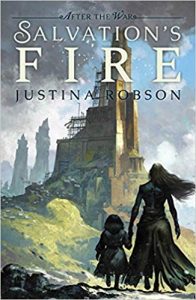 Salvation’s Fire is Leeds-native Justina Robson’s twelfth novel. Robson’s previous works have been finalists for the Arthur C. Clarke Award (Silver Screen, Mappa Mundi, Living Next Door to the God of Love) and the Philip K. Dick Award (Silver Screen, Natural History, Living Next Door to the God of Love), among others, but although she’s combined fantasy and science fiction before, most notably in her Quantum Gravity series, Salvation’s Fire marks her first foray into novel-length sword-and-sorcery-influenced epic fantasy. It’s also the second novel in the After the War se­ries, following Redemption’s Blade by Adrian Tchaikovsky. (After the War is a shared world setting, one of at least three that Solaris/Rebel­lion Publishing are developing.)

The armies of the Kinslayer devastated the land for years. Tens of thousands of people suffered and died before the Kinslayer died – brought down by a small band of heroes, and the actions of two members of the Kinslayer’s own Yorughan shock troops – and though the war might have ended, the struggle to rebuild is messier and more difficult. People are still suf­fering. One of the things the Kinslayer did was to punch holes in the world to other realms to bring back power and beings to fight for him, holes that still exist, and through which things still come, and which cut the world off from the gods.

Tzarkomen necromancers sacrificed a thou­sand women and girls to create a being that would be a bride for the Kinslayer, a repository of power that might be a sufficiently fawning gift that the Kinslayer would spare them in the war. But the Kinslayer is dead, and the Tzarkomen attempt – unsuccessfully – to dispose of his Bride in an ever-burning fire that the Kinslayer himself lit as punishment for the living forest of Hethel Vale and the creatures of spirit that were bound to its trees.

Kula is a child survivor of the war, the last of her people – a branch of the Tzarkomen regarded by the rest of the necromancers as heretics, people who can draw out life and memories from other people, but who have no spoken language. Wandering in the wake of the violence, she is the first to come across the Kinslayer’s Bride – the first to wake her. In waking her, though, Kula starts the Bride’s transformation from a blank slate to a supremely powerful person: as Kula sees her mother in the Bride, the Bride becomes a mother to Kula. But at first, the Bride – who names herself Lysandra – is full of naivety and potential. Her first waking act is to draw the fire out of Hethel Vale and into herself: a thing that no other being could do.

Meanwhile, Celestaine and her companions, the Yorughans Heno (her lover) and Nedlam, and the bard Ralas (caught between life and death as a result of the Kinslayer’s tortures), are spurred to leave Celest’s ancestral home. At least one of the handful of Guardians – for which read demigods – who survived the war wants their assistance in attempting to restore the gods. Their quest meets with Kula, Lysandra, and a young merchant called Bukham, as well as the last of the demigods – a woman called Tricky, who was inside the Kinslayer’s councils, while at the same time working for his enemies, and who has complicated feelings about her complicity in his reign of terror – and together, this small band of people will find themselves having to save the world. Again. This is complicated by the presence and occasional assistance and/or interference of lawyer/accountant/magical-artefact-collector duo Catt and Fisher.

No one really appreciates the people who do the dirty work of cleaning up.

Robson is a very different writer from Tchai­kovsky, and it’s fascinating to see her take on the same setting and some of the same characters. I’m used to reading Robson books and gasping to catch up with the batshit worldbuilding, the connections that pile one on the other and the implications that swirl with dizzying complexity around each other until the conclusion comes for you, turning – somehow – implications and connections into catharsis. That dizzying exuberance is turned down here: Salvation’s Fire is about 20% as dense with unspoken hints and implications and deep worldbuilding as, say, Robson’s Glorious Angels (2015). But when it comes to gods and powers, Robson lets loose with the same vivid ferocity and ability to depict the inhuman that has characterised her science fiction, and it makes for deeply compel­ling reading.

Robson handles the series continuing char­acters slightly differently to Tchaikovsky. Her portrayal of Celestaine, Heno, and Nedlam is subtly different: not much, just enough to be noticeable. The gallows humour and apprecia­tion for the absurd that marked Tchaikovksy’s approach to these characters in Redemption’s Blade is somewhat less here. I feel that Robson’s approach is a little more uneven in how it mixes seriousness and humour.

But her new characters are a delight that more than makes up for that. Especially Tricky, whose complexity and shades of grey makes her deeply fascinating, and whose relationship with Ralas has many hurdles to overcome, not least that she was present for some of his tortures. Kula is a very believable child – for all that she’s more than a child, too – damaged by the war, finding healing in her own ways. Lysandra grows from a supremely powerful blank slate, a child in a woman’s body, to someone who knows her own mind and who effortless assumes a leadership role.

Robson brings more viewpoint characters into play than Tchaikovsky did in Redemption’s Blade. She switches between them with verve and control, building tension in several strands towards an explosive conclusion.

Salvation’s Fire may lean more towards the serious (and the angsty) in tonal and emotional terms than Redemption’s Blade, but it’s engaged in the same project of reworking epic fantasy, of mixing up its edges with sword-and-sorcery, of being interested in the consequences of war and division, and the difficulties of making the world better when everyone is living with scars. Salvation’s Fire is less explicitly about bridging those divisions, and about the ethical dilemmas of being a “hero,” than Redemption’s Blade, but it’s a damn good book in its own right. You could probably read it as a standalone, if you had to, but I suspect it’s a lot better if you read Redemption’s Blade first.

I enjoyed Salvation’s Fire, and I recommend it. I hope both Robson and Tchaikovsky return to this setting in the future. 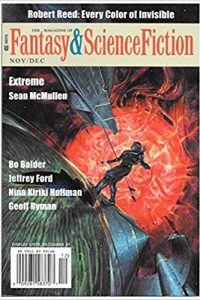 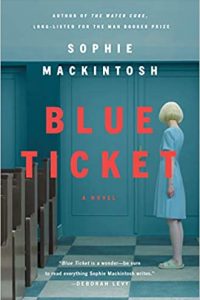