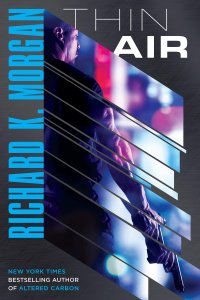 I was bowled over by Richard Morgan’s debut, Altered Carbon, and the sequels—Broken Angels and Woken Furies—that fleshed out the saga of Takeshi Kovacs. Exciting, gritty, muscular nth-generation cyberpunk, self-aware yet not archly ironic or parodic, they took the tropes of that subgenre and amped them up to reflect the harsh realities of a new century that was rapidly proving to be nastier than the 1980s that birthed cyberpunk. Not deep, but craftsmanly entertainments with not a little to say about the exigencies of survival. (Of the recent television adaptation, I remain ignorant.)

Then, as so often happens, I fell away from Morgan’s work, simply for lack of eyeball time. I missed his two standalone novels and his fantasy trilogy, A Land Fit For Heroes. Major bummer. Though of course copies sit on my shelves for that mythical day when I am afloat in Copious Spare Time. So it is with immense pleasure that I am able to turn my attention to his latest, which revisits the mode in which he first excelled. (His afterword acknowledges his long absence, with a shout out to “all those of you who wanted and waited for me to write some more SF.”) If you ever imagined that the core esthetics and themes of cyberpunk—lowlifes and high tech; corporate dominance; future noir; posthuman evolution and cyborg adaptations; hardscrabble urban environments–were played out, Thin Air will set you straight, and kick your butt in the process.

Our setting is Mars, a couple of centuries from the present. With a few surface settlements, human habitation is concentrated in the (obscenely allusive) Gash: the 4000-kilometer-long Valles Marineris. The canyon is roofed over with the Lamina, an artificial sky, and stuffed full of slums and penthouses, commerce and recreation, transport systems and “slush riders,” those who “ride down waste outflow waterfall systems up to six and seven kilometers tall for fun.” Morgan renders the stinks and colors, sounds and establishments, crowds and topography of the place in full-bore sensory details. We never lose our vivid bearings as we follow our antihero, Hakan Veil, through his violent peregrinations.

Veil was a kind of mercenary for an interplanetary security firm—a “vacuum assault ninja,” one of his foes opines—shuttled here and there, to wherever his brutal martial skills were needed. But he screwed up big and was canned, deposited jobless on Mars with many—but not all—of his proprietary embedded systems deactivated. (One that remains active is an onboard AI named Osiris. Wisely, Morgan endows the construct with just enough individuality to be a lively conversationalist, but not so much as to become a “sidekick,” or to steal the show from our protagonist.) During the past fourteen years, Veil—engineered as a warrior from the womb—has survived with odd, humble enforcer-type jobs, always dreaming of earning enough for a ticket home to Earth. But even living spartanly in a capsule hotel, he can never accumulate enough “marins.” Especially since his physiology require four months of cryo-sleep every year—a plus when he was being shipped from world to world, but now a drag.

As our tale opens—with a classic rain-drenched noir vibe that is ultimately mirrored in the coda—we find Veil fulfilling a paltry assignment: offing a nightclub owner both to gain personal revenge and so that Chinese factions can muscle in on the territory. He is promptly arrested (with secret assurances that his Chinese backers will free him quickly). But while still in jail, a cop of his acquaintance, Nikki Chakana, offers him another assignment that will bring instant liberation—and maybe even a trip back to Earth.

Mars sovereignty is under the auspices of COLIN, an Earth-based organization, and they have just sent a large task force to the red planet to deal with government corruption and other malfeasances. One of the COLIN staffers is a beautiful African woman named Madison Madekwe. Her assignment is to investigate whether the important and high-stakes Mars lottery is rigged. Specifically, she is looking for a vanished winner named Pavel Torres. Veil is tasked with being her bodyguard, since nativist and populist groups on Mars hate the Earthers.

All starts out well enough. Veil and Madekwe even develop something of a subliminally lustful rapport. But then—small spoiler—Madekwe is abducted. This occurs roughly a third of the way into the book. The rest of the action-packed, Chandler-convoluted plot finds Veil following one tenuous, enigmatic lead after another—not out of a sense of justice, or to promote any particular ideological stance, or even out of curiosity, but simply to maintain the honor of his contract. He has to retrieve Madekwe to justify his pay and his sense of duty.

But of course, what he ends up uncovering is a dozen interlocking conspiracies, featuring characters high and low, a cast that allows Morgan to explore many milieus. And almost everyone in the game wants Veil dead. This leads to a large number of ultra-violence set pieces, limned by Morgan with balletic precision and smashmouth grace. In the end, after many assaults, Veil pulls several, if not all, the chestnuts out of the fire, is almost undone by a late twist, then squeaks partially through. I think I betray no suspense by saying this much, since the pleasures are all in who does what to whom, the betrayals and shifting alliances. While there are themes about independence and power, the main thrust of the tale is the sheer action.

Morgan’s world-construction, as I alluded above, is solid and clever and forceful. What do you think of code-carrying mosquitoes who deliver software and wetware upgrades by biting their customers? The weaponry is delightfully futuristic. And the various social niches, from mayor to hooker, are all organically dovetailed. But I think Morgan’s main aim in this book is the character development of Veil. He is far from a noble but tarnished knight like so many PI’s. He is macho, rude, deadly, and brutal, operating under no ethos except that of survival and a kind of self-honor. As narrator, he immerses the reader in his mindset, and, if one is at all sympathetic, one becomes a partisan of this utilitarian death-dealer. Mad, bad, and dangerous to know, Veil has been dealt a bad hand by his creators, but plays it with panache and no-nonsense brio.

There comes an anomalous moment in Chapter Thirty. Veil has just slaughtered about half a dozen killers who were out to ice him. One man remains barely alive. Rather than turn his back on the fellow, Veil does this:

I went back to him, lifted his head again, tried to clear the blood from his throat. It wasn’t making much difference anymore. I propped him back up in his seat inside the crawler, was turning to leave, when he pawed convulsively at my arm with his undamaged hand. He didn’t look at me, was staring straight ahead through the bullet-starred windshield, and for a moment I wondered if he knew I was there anymore. But then his eyes slid sideways at me, terror-filled gaze, as if he barely dared look to see what had crept up beside him. His hand pawed again, insistent, like the pleading of a hungry dog.

I sighed and took it in my own. He said nothing, just nodded minutely, jerkily, sat there panting delicately, staring at what was coming. I leaned against the edge of the door hatch, staring out at the carnage I’d wrought, and waited with him. His breathing slowed and his sweaty attempt at a grip started to loosen, then tightened, panic-stricken again, then loosened…

Pale shadows slid down the hangar wall behind us. The toy-sized sun came up, mashed out and distant. I began to worry about a follow-up crew.

That moment of actual tenderness and fellow-feeling reveals the wounded core of Veil’s character. The segue to practicality shows the reversion to the protective shell. In those few paragraphs—and some other similar interludes as well—Morgan justifies all of Veil’s bloody progress through life.

Both kinematic and cinematic, Thin Air is the Leigh Bracket Planet Stories tale that would have been written had Brackett been raised on a diet of Oliver Stone films and twenty-first-century headlines.