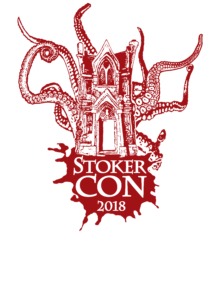 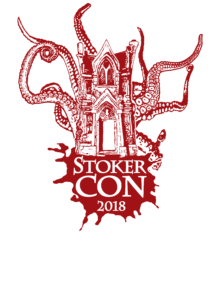 StokerCon, sponsored by the Horror Writers Association, was held at the Biltmore in Providence RI, March 1-4, 2018. HWA president Lisa Morton said, “It’s hard to beat hundreds of horror-lovers huddled together in a suppos­edly haunted hotel while a Nor’easter rages outside.” Guests of honor were Ramsey Campbell, Caitlín R. Kiernan, Victor LaValle, Elizabeth Massie, Sam Weller, and Craig Engler; Jeff Strand was emcee. Morton said, “This was our third year of putting this event together and I feel like this was the year we nailed it. We learned a great deal from our first two conven­tions and tried to put most of what we learned into effect this year; we also had a wonderful venue….” Linda Addison was the recipient of the Lifetime Achievement Award.

There were around 400 attendees. Co-chair James Chambers reported more than 60 author readings, along with around 80 panels and presentations. Chambers said, “Our Horror Uni­versity workshop series offered more than a dozen two-hour, intensive workshop classes with veteran writing instructors. We also hosted a full day of programming for Librarians as well as two days of academic presentations as part of the Ann Radcliffe Academic Conference. On the third day of the con we presented the Final Frame Film Competition, which show­cased about a dozen short horror films (all under 13 minutes) from around the world.” Highlights included Dacre Stoker’s presentations on the history of Bram Stoker and Dracula, a 200th anniversary panel in honor of Mary Shelley’s Franken­stein, a tribute panel to Jack Ketchum, and the Stoker Awards banquet, attended by about 160 congoers. Panels included “State of the Genre” moderated by Morton and featuring the GoHs; “Representation in Horror” with Marc Abbott, Linda Addison, Larissa Glasser, E.F. Schraeder, and Delona South­erland; and “Independent Publishing: Outlook for the Future” with Kate Jonez, John Edward Lawson, John McIlveen, Olivia Monteleone, and Alex Scully. Additional offerings included pitch sessions paired with a “Pre-pitch Panel” where “agents, editors, and publishers taking pitches during our Pitch Sessions talk about what they look for in a pitch”; and a dealers’ room with “around a dozen” vendors, including Borderlands Press, Haverhill House, Hippocampus Press, Necronomicon Press, Raw Dog Screaming Press, and Providence bookseller Books on the Square – the official con bookseller.

Kameron Hurley: How to Write a Book in a Month